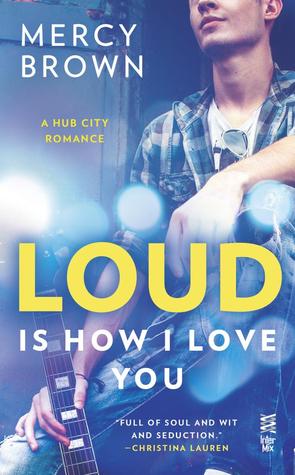 Loud is How I Love You by Mercy Brown
Series: Hub City #1
Also in this series: Stay Until We Break
Published by InterMix on January 19th 2016
Genres: Fiction, New Adult
Number of Pages: 227
My rating:

My Review of Loud is How I Love You

What’s the first rule of being in a band?

“Don’t f*ck anyone in the band”

Emmy has seen first hand the damage breaking this rule can do to a band, but does that stop her from sleeping with her guitarist? Nope. Loud is How I Love You tells the story of what happens in the mid-90’s when the lead singer of Stars on the Floor sleeps with her friend and bandmate, Travis.

All her life, Emmy has wanted one thing: to be a successful musician. Music is in her blood, and she has worked hard for years, writing, performing, and traveling for the band. Her blood, sweat, and tears have literally gone into her music and her performances.  She can’t and won’t allow personal entanglements and the inevitable bitter breakup to derail her dream.

I totally loved Travis (he has the patience of a saint!), but I had a hard time truly connecting with Emmy. Since the story is told from her point-of-view, we get to see all of the hopes and dreams she has for her future, how much she loves being in a band with people who ‘get it’, and how hard she is trying not to mess up a good thing. That part was cool, but being inside Emmy’s head so much was a little difficult for me. I know she is young and inexperienced, but her thoughts were warring with each other so much, I just wanted to slap some sense into her—more than once.

All of that aside, the 90’s band references were awesome and brought back memories of late nights in college, listening to CDs and going to clubs. There are also some spectacular shenanigans happening that had me laughing out loud.

Loud is How I Love You is definitely not a typical rock romance. The writing is fresh and the story is unique, although I am not entirely sure it was my favorite style. I enjoyed the story, though, and I am curious to see what is coming next for this interesting, rag-tag group of characters.

Mercy Brown is a retired indie rock front girl turned author and LOUD IS HOW I LOVE YOU is her first book. LOUD is a New Adult novel and will be published by Intermix (Berkley-Penguin) in January 2016. LOUD is based, very, very loosely on Mercy’s experiences fronting bands in the 90s.