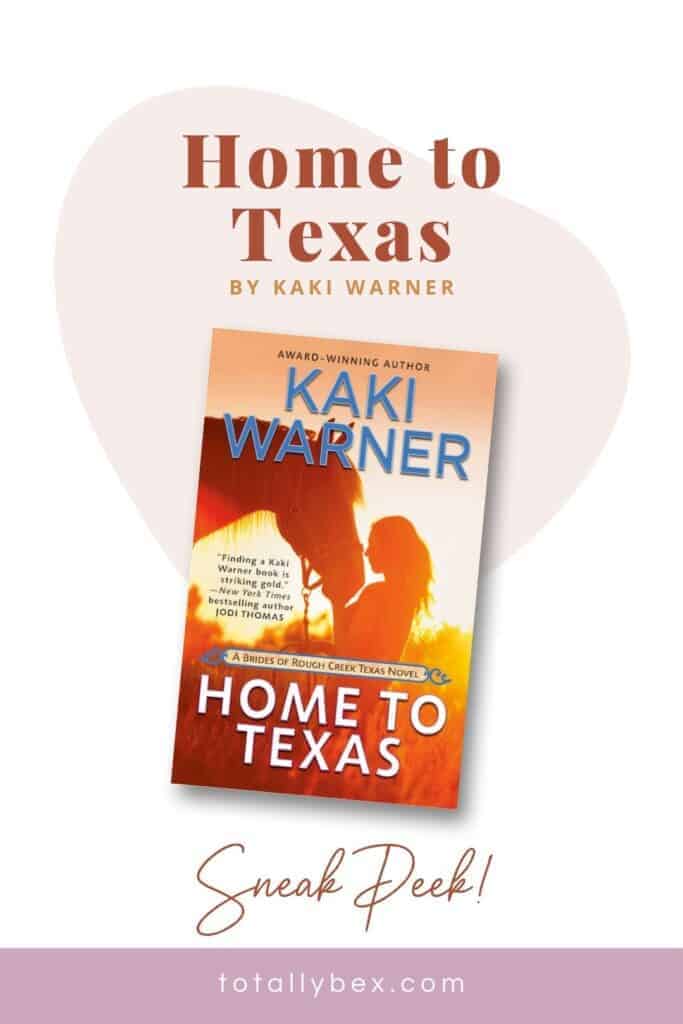 Enjoy this excerpt from Home to Texas by Kaki Warner, a suspenseful western romance about two ex-soldiers who get a fresh start and a second chance at love and the second book in the Brides of Rough Creek Texas series!  Home to Texas releases on June 29th, 2021. 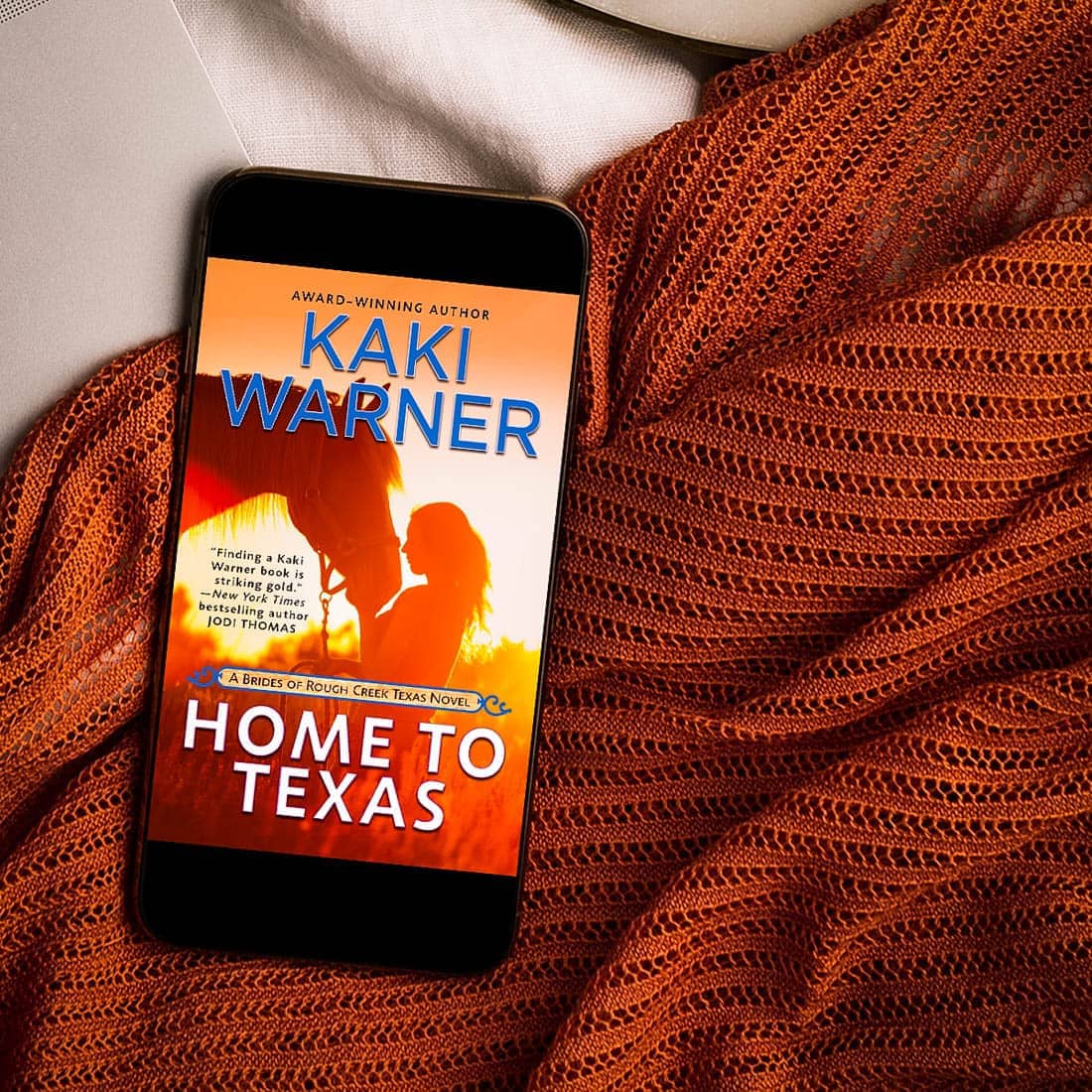 Lieutenant KD Whitcomb had mapped out her career from West Point to the Pentagon. But when an injury under questionable circumstances forces her to leave the army, her dreams fall dead at her feet. Feeling lost and needing to rediscover the tough woman beneath the uniform, she heads back to the family ranch in Rough Creek. Only two things get her through the nightmares and sleepless nights: the support of her family and the CID officer investigating the incident in Afghanistan. He infuriates her. Makes her laugh. Gives her hope.

Richard Murdock is struggling, too. There’s something fishy about this last case…and the threats coming from Afghanistan aimed at both him and KD. He’s ready to leave the army and make a new start. But how will he protect KD? And what should he do about the growing attraction between them? He’s been burned before. But there’s something about KD’s vulnerability and strength that calls to him, and he’ll do whatever it takes to protect her and give her a chance to build new dreams…including helping her start a PTSD equine therapy program at the Texas ranch.

If they can overcome the threats against them and heal old wounds, this second chance might be better than they ever dreamed. 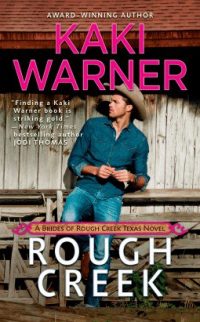 Excerpt from Home to Texas

It was hot, standing by the car. She could feel sweat forming on her back, and saw beads of it gathering on Murdock’s neck. It was a nice neck.

She should probably go. And do what? Sit in an empty room, staring at the walls and feeling sorry for herself? She’d done too much of that lately. “You want to get lunch?’ she asked on impulse.

“Whatever.” She reached for the driver’s side door handle.

“But I know a quiet little diner that serves great pie and coffee,” he said before she could open the door. “We could go over notes for the hearing.”

Not something she wanted to do. But at least she wouldn’t be alone. “You drive.”

He tossed his duffle in back, then followed her to the other side of the car. Reaching around her, he opened the passenger door. “Need help?”

“Sitting down? No, I think I can manage.”

“Smartass.” But he said it with that grin. Which made her grin, too.

As they pulled out of the parking lot, he glanced over at her with a smile tugging at one side of his mouth. “So is this like . . . a date?”

“You don’t have to pay my way, if that’s what you’re worried about.”

“I’m more worried about what to do. I haven’t been on a date in a long time.”

“People don’t go on dates anymore.” At least, she didn’t. She got together with friends, met up with a fellow officer for coffee or a movie every now and then, had a poignant goodbye hookup with a guy she’d gone out with during her last year at West Point. But living in close quarters with hundreds of other soldiers didn’t leave much time for “dating” in the traditional sense. “And anyway,” she added, “I never go on a date unless I know the guy’s first name, at least.”

He surprised her, like he had in the hospital, by laughing out loud. A warm, appealing, masculine chuckle that brought a clench to her chest.

He stopped at the gate. They showed their active duty IDs to the gate guard, who waved them through, then he turned toward Copperas Cove, rather than Killeen. “Why do you call yourself KD? What’s wrong with Katherine Diane?”

“Not pretentious enough,” she said. “I changed it to KD after I signed up for Army ROTC. Sounded more decisive. Less girly.”

“Of course you do. You’re a guy. But I’d prefer to be admired for my skill set, rather than my ass.”

“Too bad. You’re admired for both.”

The diner was a quaint little family eatery with a retro feel to it. Formica-topped tables, soda fountain, booths and chairs with plastic-covered seats and chrome legs. There were even checkered gingham café curtains at the front windows. Like stepping through a time warp. KD and Richard were the youngest customers, but instead of a Happy Days look-alike, their waitress was a gum-popping, purple-haired high school kid wearing more makeup than KD had bought in the last year. Overall, a nice change from institutional furniture, gray walls, and camo BDUs. The pie was homemade and delicious, and in deference to the temperature on the other side of the window by their booth, they both opted for iced tea, instead of coffee. Which was freshly brewed and also delicious.

Having gotten past the initial awkwardness and moving beyond rank to first names, KD found Richard Murdock surprisingly good company.

Kaki Warner is an award-winning author and long time resident of the Pacific Northwest. Although she now lives on the eastern slopes of the Cascade Mountains in Washington State, Kaki actually grew up in the Southwest and is a proud graduate of the University of Texas. Her years spent riding horses and enjoying the expansive views of Texas became the Historical Romance Author, Kaki Warner inspiration for the backdrop of her novels - the wide-open spaces of historic New Mexico Territory.