Thank you for the advanced copy of BEDMATES by Nichole Chase.  All opinions are my own. 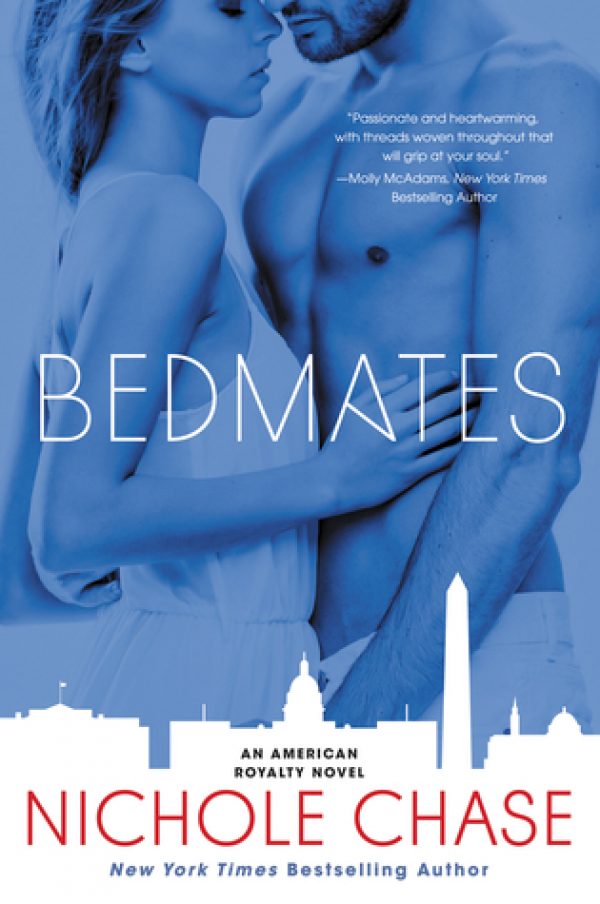 Everyone makes mistakes, especially in college. But when you’re the daughter of the President of the United States, any little slip up is a huge embarrassment. Maddie McGuire’s latest error in judgment lands her in police custody, giving the press a field day. Agreeing to do community service as penance and to restore her tattered reputation, Maddie never dreams incredibly good looking but extremely annoying vice president’s son, Jake Simmon, will be along for the ride.

Recently returning from Afghanistan with a life-altering injury, Jake is wrestling with his own demons. He doesn’t have the time or patience to deal with the likes of Maddie. They’re like oil and water and every time they’re together, it’s combustible. But there’s a thin line between love and hate, and it’s not long before their fiery arguments give way to infinitely sexier encounters.

When Jake receives devastating news about the last remaining member of his unit, the darkness he’s resisted for so long begins to overwhelm him. Scared to let anyone close, he pushes Maddie away. But she isn’t about to give up on Jake that easily. Maddie’s fallen for him, and she’ll do anything to keep him from the edge as they both discover that love is a battlefield and there are some fights you just can’t lose.

Take an enemies-to-lovers romance, throw in a dash of a forbidden relationship, add wounded war veterans and an adorable dog, and you have a pretty awesome basis for a story. Bedmates takes all of these things and combines them into a very sweet story that is sometimes heavy and heartbreaking.

Madeline is the President’s daughter who’s more free-spirited and rebellious than the perfection expected of her.  She’s seen as an impulsive screw up after being arrested for her activism.  Maddie loves her family, but she’s not a fan of the politicking and grandstanding that comes along with it.  What she does know is that Jake hates her and now she has to work with him to make restitution for her arrest.

Jake is a wounded war veteran who is constantly traveling while helping his mother, the Vice President, with her returning veteran program.  He’s constantly on the go for her dog and pony show.  With all of his traveling, Jake has never dealt with the effects of the war and his PTSD is left untreated.  Maddie was the last person Jake expected to help ease his suffering, but spending time with her becomes a necessity to his sanity.

I loved Maddie and Jake, both together and separately.  They just have good hearts, are hard workers, and are genuinely caring people.  Whether they are fighting for the better treatment of animals or people, their depth of feeling shows throughout the book.  Their tension, banter, and good-hearted ribbing were entertaining.

I also enjoyed the “American Royalty” aspect of the story.  Seeing how the children of politicians are raised, paraded around for photo ops and TV appearances, and expected to fall in line was eye-opening.   Bedmates makes an excellent first book in this new series and I am looking forward to reading more from Nichole Chase.

The hand on the back of my neck tilted my head so he could kiss me better and I melted against him. I’d waited for this moment most of my life and I sure as hell wasn’t disappointed.

The kiss wasn’t rushed, wasn’t abrupt. It was slow, lingering brushes of lips, as our breaths slid over each other. It was an intense, raw moment as we tested unknown waters and what we found only increased our determination. When his tongue swiped across my bottom lip in a request for entrance I opened on a sigh. His free hand caressed my hip before sliding around to the small of my back, tucking me against him.

The feel of his hard body pressed against me made my head spin. Every delectable inch of him was hard in just the right way. As his mouth danced over mine, fire ran through my veins. Everywhere that he touched me came alive and I wrapped my arms around his neck, hungry to feel more of him pressed to me. This was what I’d been looking for all these years. I felt alive and appreciated with each stroke of his tongue and touch of his hands.

His arm tightened around my waist and my feet left the ground. I gasped as he sat me on the unfinished kitchen island. Dark brown eyes drilled into mine as his hands slid down to cup my a$$ before gently spreading my legs so that he could fit between them. He pressed against my center and I couldn’t help but groan as he pulled me tight. Wrapping my legs around his hips I pushed even closer, trying to relieve the building ache.

He groaned into my mouth and I took the moment to nip his bottom lip. I’d wanted to do that forever; to feel it plump between my teeth. One of his hands squeezed my a$$ tighter and he grinded his erection into me, causing my head to fall backward on a gasp of pleasure. Each move against me made me gasp louder, and my eyes fell shut. With one hand he pulled my hair free from the rubber band before tangling his fingers in it.

“God, you taste good.” His voice was raw, harsh, and it sent shivers down my spine. He ran his nose along the column of my throat before nipping gently below my ear. “Should have done this forever ago.”

Nichole lives in Georgia with her husband, energetic daughter, two rescue dogs, Sulcata tortoise, and two cats. When not writing, you may find her reading, painting, crafting, or chasing her daughter around the house while making monster noises.