Thank you for the advanced copy of HOLLYWOOD DIRT by Alessandra Torre.  All opinions are my own. 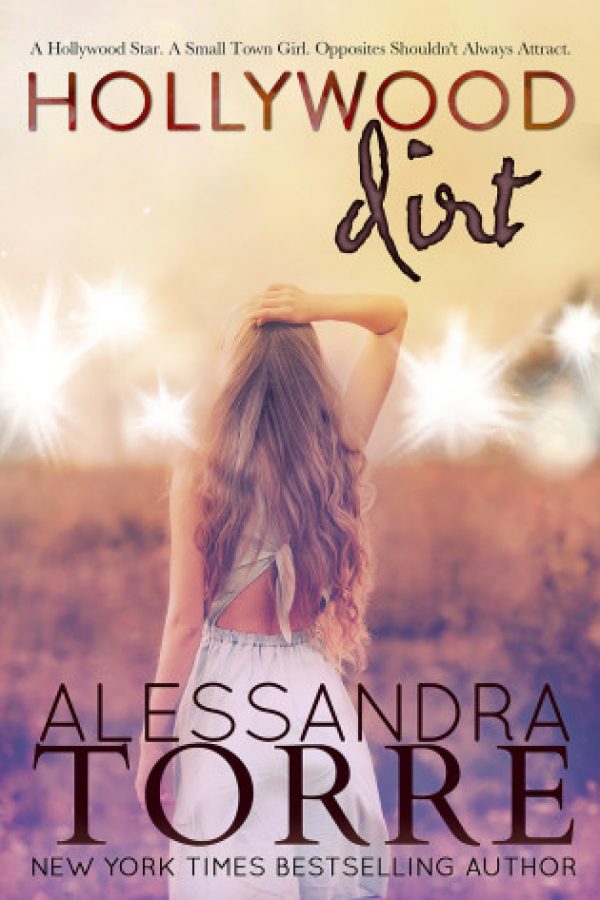 Summer Jenkins. That’s me, a small town girl stuck in Quincy, Georgia. I cook some mean chicken and dumplins, can bluff a grown man out of his savings in poker, and was voted Most Friendly my senior year.

We were from different worlds. Our lives shouldn’t have collided. But then Cole Masten read a book about my small town. And six months later, his jet landed on our dusty airstrip, and he brought Hollywood with him.

From the start, I knew he was trouble. For our town. And for me.

Hollywood Dirt by Alessandra Torre is a fun, light-hearted, and sexy story about Cole Masten and Summer Jenkins. Cole is a Hollywood megastar, while Summer is a good Southern girl living in Quincy, Georgia. Quincy is a small town steeped in Southern tradition–one where the citizens will say “Bless your heart” to your face, then gossip behind your back. (You know the type.)

I think the best way to describe this story is Pride and Prejudice meets Steel Magnolias. Cole and Summer are very much like Darcy and Elizabeth–Summer’s Southern pride is on full display, contrasted by Cole’s prejudice toward the ‘country bumpkins’ and anything non-Hollywood.

Just like Lizzie Bennett, Summer is a spitfire and a force to be reckoned with. She is fierce, strong, independent, and most certainly talked about behind closed doors by Quincy’s high-society. However, she is also lonely and only shows her soft under-belly to the few people close to her. I thought Summer was very likeable and I absolutely loved her as a character. (The secondary characters were also awesome!)

Summer has worked hard for everything she has, even if it doesn’t look like much to outsiders. In contrast, Cole hasn’t had to lift a finger without an assistant’s help in over a decade. As soon as he meets Summer, the differences are glaringly obvious. But, as we all know, opposites attract. I will warn you, friction between them runs high for much of the book.

The writing in this book was fabulous. There is so much depth, with each scene so richly described and full of details; it played like a movie in my head. Torre pulls back the curtain on small-town Southern living and plenty of well-kept secrets are revealed. (I live in a Southern state, so I feel confident in saying that her descriptions and insights are spot-on.)

I would be remiss if I didn’t mention the epilogue. Let me tell you, it’s sweet and satisfying–kind of like a Snickers bar. This book is filled with tension and passion, and I loved every minute of it. I highly recommend it!

When the door to the production trailer burst open, it brought with it a wave of heat and beauty. Cole looked up from the storyboards and locked eyes with Summer, who blew across the room at him like a tornado on tilt.

“There’s no love story between Ida and Royce.” Summer snapped, throwing down the script, pages fluttering down between them. In the small trailer, conversations stalled and he could feel the attention turn their way. “I’ve read the book. Three times!”

It was good to know that someone had read the damn book. Cole glanced down at her temper tantrum of a mess and back up, raising his eyebrows mildly. “It’s a movie,” he said, turning back to the storyboards. “The writers are adding some excitement. It’s normal. You’d know that if you were in this business.” The dig was unnecessary but he couldn’t help it. This woman turned him into the devil.

“I read the first script. The one you sent over with my contract. Ida and Royce hated each other. Why would Royce…” she snatched up a page from the ground and read out a line. “pushes Ida against the file cabinet and kisses her passionately.” She balled up the page and threw it down to the ground and he could see, in her eyes, the panic. Panic. An unexpected reaction.

“We’ll use that,” Don made the dangerous move of stepping in, putting a soft hand on her shoulder. “You don’t understand. The passion from their hatred will make it hotter.”

“No.” Summer said, her face hard, her eyes on Cole. “It doesn’t make it hotter. It makes it stupid.”

“Aww… come on, Summer.” Cole chided, stepping closer, his hand reaching out to pull at her wrist. She fought him, yanking it back and the moment of their bodies meeting didn’t happen. He leaned down and whispered, right against her ear, the smell of her apple-scented lotion enough to make him want to empty out the production trailer right that moment. “Sure it does.”

She jerked back and twisted away. “If he kisses me on camera I’m going to lose it.” She shot at Don, pointing an accusatory finger in Cole’s direction.

“I know you will,” Cole laughed, crossing his arms to fight from reaching out.  “You’ll fall apart under my mouth, baby.”

Summer screamed in response, her hands thrown up in frustration, and spun to leave, her script left behind, the slam of the exit door loud in the full production trailer.

“That went well,” Cole mused. He linked his hands and rested them on his head, rolling his shoulders back. Panic. She’d had panic in her eyes. F*ck.

“What do you expect?” Don said. “You threw this on her without warning. I told you we should have met with her this morning, gone over the changes to prepare her. But no – you just wanted to dump it on her via call sheets and sides.”

“Dump it on her? I was People’s Sexiest Man last year. She’s not mentally adjusting to a war camp for God’s sake. How hard is it to kiss me?”

“It’s actually three kisses,” a dark-haired PA to his left pointed out. “And a grope.”

He gave her a hard look and she withered a little.

“No,” Don snapped. “With my luck you two would make up and any authenticity to the scene would disappear. Just stay away from her and be ready at eleven.”

Cole chewed on his cheek, then nodded. “Fine.” Don was right. He should stay away from her. Far. Far away.

Alessandra Torre is an award-winning New York Times bestselling author of ten novels. Her books focus on romance and suspense, all with a strong undercurrent of sexuality. Torre has been featured in such publications as Elle and Elle UK, co-hosted Dirty Sexy Funny with Jenny McCarthy, as well as guest blogged for the Huffington Post and RT Book Reviews. She is also the Bedroom Blogger for Cosmopolitan.com.