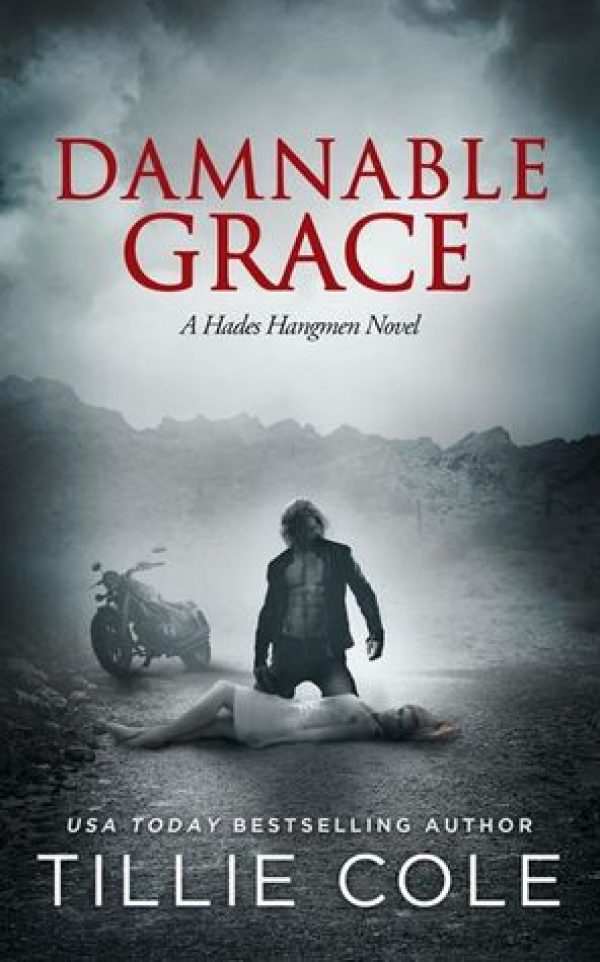 EVEN THE BROKEN, THROUGH LOVE, CAN FIND GRACE…

The burden of guilt never lifts from the heart.

Born and raised in The Order of David, Sister Phebe knows nothing but cult life. Head of the Sacred Sisters of New Zion, Phebe was groomed from childhood for one purpose: to seduce. Prized as a harlot, as a New Zion whore, Phebe is taken from the doomed cult by Meister, the notorious leader of the Aryan Brotherhood. Taken as his possession. Taken to be the woman who will obey his every sexual demand. Under his heavy hand, Phebe finds herself in a place much worse than she could ever have imagined… with absolutely no one to help. And no glimpse of hope.

Xavier ‘AK’ Deyes is content with his life as Sergeant-At-Arms of the Hades Hangmen. Leader of the infamous ‘Psycho Trio’ and ex-special ops sniper, AK knows how to fight. Experienced in warfare and schooled in military operations, AK is vital to the Hangmen. When his Vice President needs help retrieving his missing sister-in-law, Phebe, from a Klan-funded trafficking ring, AK volunteers to go in. AK remembers the redhead from New Zion. Remembers everything about her from the single time they met—her red hair, blue eyes and freckled face. But when he finds her, heavily drugged and under Meister’s control, her sorry condition causes him to remember more than the beautiful woman he once tied to a tree. Saving Phebe forces hidden demons from his past to return. A past he can never move on from, no matter how hard he tries.

As AK fights to help Phebe, and in turn she strives to help him, they realize their secret sins will never leave them alone. Kindred broken souls, they realize the only way they can be rid of their ghosts is to face them together and try to find peace.

Despair soon turns to hope, and damaged hearts soon start to heal. But when their deep, painful scars resurface, becoming too much to bear, the time comes when they must make a heavy choice: stay forever damned; or together, find grace.

Tanner ran his hand over his head. The brother hadn’t attended one of our cookouts or sl*tfests in weeks. Not that he ever entertained himself with sluts—still too hard for his piece of pussy down in Mexico. He’d been busy trying to track down Meister. Unlike most of the white-power sh!t Tanner and Tank grew up with, this Meister was untraceable and off the grid. As much of a computer whizz kid as Tanner was, Meister was proving to be one slippery f*cking snake to pin down.

“Gotta be honest, I didn’t think I was anywhere close to finding anything on this pr!ck.” Tanner nodded toward Tank. “We knew of him, of course. I knew he had dealings with my father and uncle, just never met him myself. He’s Ar-an Brotherhood but works closely with the Klan. And there’s nothing on him. No email traces, no invoices, no texts. Nothing.”

I gritted my teeth and glanced at Styx, who was listening closely. Ky wasn’t originally gonna tell the prez about the plan to get Phebe, because of his f*cking wedding, but that didn’t last long. Styx knew something was up with his VP. He read him like I read Flame and Vike. So Ky fessed up, and Styx was all for the plan. He’d had to push his wedding back by a month anyhow to get the pastor Mae wanted to conduct the ceremony, so he had time to kill.

“But you found something?” Ky translated as Styx signed.
Tanner sighed, the black circles around his eyes showing how hard the brother had been working. “I got something.” He shook his head, and my blood ran cold. I knew whatever he had found wasn’t good.

Tanner opened the file in front of him and threw a photograph toward the prez. Styx looked at it, then gave it to Ky. “Some middle-of-nowhere ghost town?”

Tanner faced me. “Yeah, or at least his father did. He’s dead now, but the deeds are still in his father’s name. Been in the family for decades. Took me a while to trace it.” He shook his head. “Meister is notorious among the Klan. Right, Tank?”

“Yeah,” Tank agreed. “Never met him either, but we’d all heard of him. Pr!ck has been mobilizing for years for the race war they think is coming. Real serious, Oklahoma-City-bomb sh!t. From what we’ve heard, the guy has a one-track mind when it comes to advancing the white race. You think H-tler was f*cked up? Well, imagine if he had a kid who was one built motherf*cker, with a f*cking carbon copy of his psycho mind; and you’ve got Meister. F*cker ain’t even German. Just wishes he was, spouting German phrases around like he’s born and bred Berlin. Delusional a$$hole.”

“This ain’t gonna be easy,” Tanner finished, looking at me, Vike, Flame, Hush, and Cowboy. It was the five of us who had agreed to go looking for Phebe. Hush and Cowboy nodded at me to let me know they were still in.

“So he’s in this ghost town?” Ky asked, translating Styx’s sign language again. “If so, we’ll all just go in and get him, make the f*cker talk and tell us where he’s got Phebe.”

Tanner sat forward. “He ain’t just living in the ghost town or hiding out. That’s where he has his enterprise.”

“Enterprise?” Ky echoed. It was his own question this time.

Tanner nodded. “From what I can tell, it’s a f*cking brothel. Members of the Ar-an Brotherhood, Klan, or Klan sympathizers, can go there for a night or a few days at a time.” Tank shifted uncomfortably next to him.

“Ain’t sure, but I’m thinking it ain’t just getting your dick sucked and f*cked. It’ll be real f*cked-up sh!t. If Meister’s reputation is anything to go by, we would be walking into an organized, armed hellhole.” Tanner’s eyes darkened. “I get the Klan has a reputation for being full of backward rednecks. I ain’t gonna lie—growing up, most of my father’s cronies were that way. Thick as f*ck and couldn’t do sh!t without screwing it up. Skinheads, lower-ranked soldiers, you know?”

“But there were some members that weren’t,” Tank continued. He cast an embarrassed glance at Tanner. “We weren’t, for starters.”

Tanner nodded. “It’s not the norm, but some of us were good. Smart, strong fighters, or just outright f*cking psychos. The skinheads and rednecks are the foot soldiers. The likes of us, the likes of Meister, are the f*cking SS. The planners, leaders, the generals—the ones who believe in the cause so much that they’re f*cking lethal with what they’ll do, what they’re capable of. Meister is true Ar-an Brotherhood; he’s preparing for war. He’s the real f*cking deal.”

Tanner nodded. “Comes from northern Texas. Never moved our way before. But the Klan are building day by day, joining forces with other white supremacist gangs—like the Brotherhood—and with the sh!t that’s on the news twenty-four-seven, blacks and whites at each other’s throats, he’s moved to the headquarters.” The brother’s jaw clenched. “To my father and uncle, who’ll be protecting him from being found out by the feds.” He sighed and ran his hand down his face. “From what I can figure out, this ghost-town brothel of his has only existed in the last year or so. He’s looking to fund something.”

“They ain’t dealing guns?” Cowboy drawled. “I thought that’s what Rider said the contract with the cult was for?”

“Rider was sure it was guns. At least it was when he was dealing with the Klan—it was all about arms. The Klan was selling them on and taking a cut.”

“His f*cking twin,” Hush spat. “He changed the arrangement, didn’t he? When Rider was locked up in cult prison?”

“Think so,” Tanner said after a few seconds of silence.

“Then what the f*ck are they dealing? What was Judah giving them if not Israeli guns?”