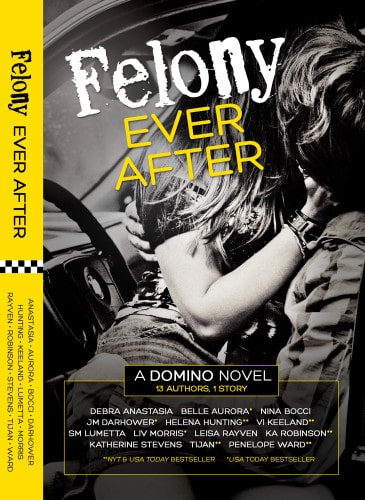 My Review of Felony Ever After

Felony Ever After is a novel written by 13 different authors.  Some are seasoned pros, some are brand new, so I thought, “How is THAT going to work?”.  Each author wrote a chapter (or two) and then passed the story on to the next person.  While the concept of a chain story isn’t new, I know I’ve never read a novel like this before.  I don’t know how they made it come together, but they pulled it off seamlessly.

The story is about Verity Michaels, a 20-something receptionist trying to make something of herself in New York City.  She has great friends, an unnervingly pervy boss, and a habit of picking up the slack at work.  One night, after working late, Verity ends up sharing a cab with Hudson Fenn.  After a very unexpected evening, hilarity ensues and their rollercoaster relationship begins.

I was surprised by how much I enjoyed FEA.  It’s light-hearted and fun, with a totally unique storyline.  There is also a touch of angst with plenty of steam.  I thought the story flowed well, which honestly was a concern of mine from the beginning.  Verity and Hudson are hilarious and their banter is awesome.  Twitter is featured heavily in the plot, which was another interesting twist.  I looked forward to the end of every chapter to see what the characters tweeted and the hashtags are priceless.

I love how this book turned out and I have found some new-to-me authors that I will definitely be adding to my ‘must read’ list.  Congratulations to the authors on a job well done!

Visit the book’s web page and learn more about these authors: http://www.salesexportt.com

When Katherine Stevens isn’t writing, she can usually be found opening juice boxes and looking for lost shoes. Her kids keep her quite busy and always zig-zagging across the line of sanity. She is a lifelong Texan with a terrible sense of direction and even worse memory. She thinks life is entirely too hard if you don’t laugh your way through it.

As a child, she dreamed of being the most sarcastic astronaut in history, but her poor math skills and aversion to dehydrated food kept her out of the space program. Now she writes to pass the time until NASA lowers their standards. Your move, NASA.

Nina Bocci is a novelist, publicist, eternal optimist, unabashed lipgloss enthusiast, constant apologist, and a hopeless romanticist. She has too many college degrees that she’s not using, and a Lego addiction that she blames on her son.

S.M. Lumetta was born in Detroit, MI, and now resides in NYC. Since she was small, she has adored storytelling in all its forms, especially books and films. Sooner and later, she figured out that since her love of words was overwhelming, she had no choice but to take the words in mind and share them. Romance is her favorite read, but horror and crime novels are a close second. She loves to travel and has a bucket list of places to visit long enough for several lifetimes. She also has a plethora of unnecessary t-shirts, a penchant for sarcasm, and an unholy love for the oxford comma.