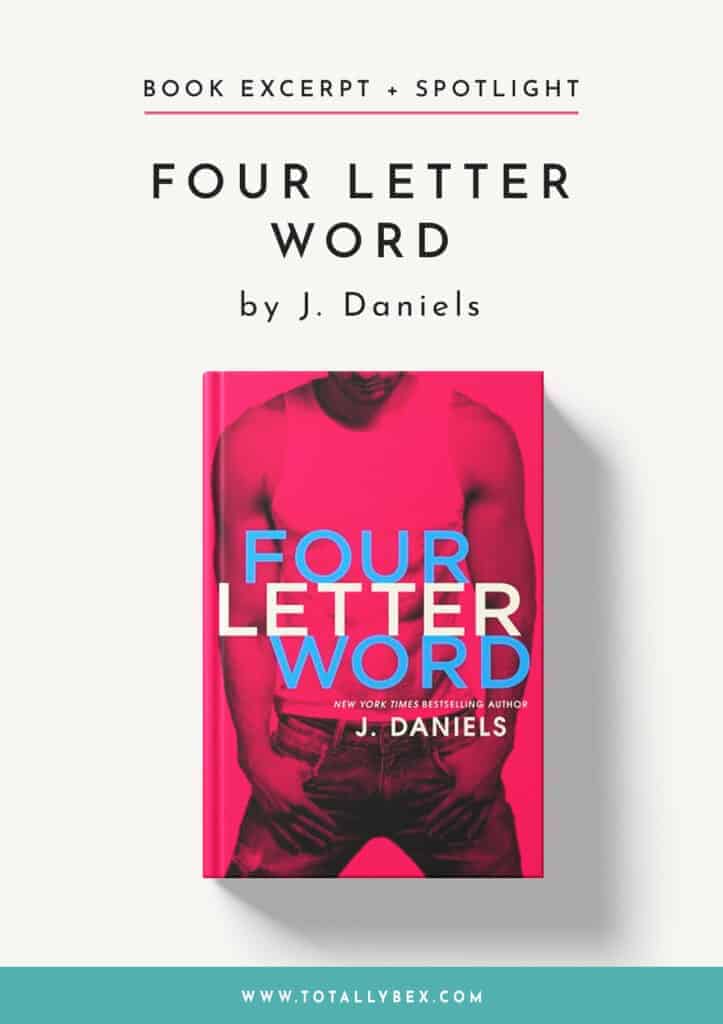 Four Letter Word by J Daniels is the first book in the Dirty Deeds series. Enjoy this sneak peek and check out the author’s fave 4-letter words! 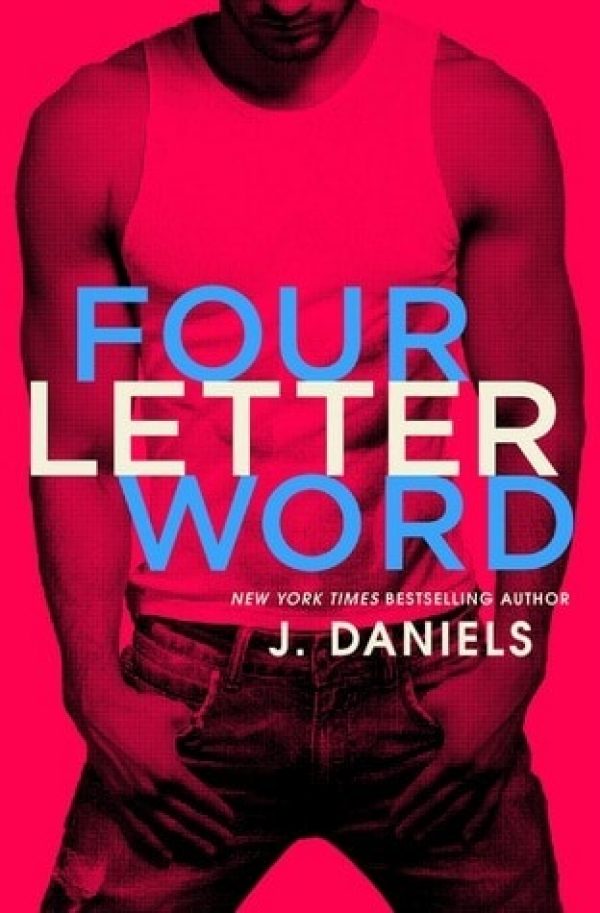 Sydney Paige was never so mortified to hear the words “wrong number” in her life. She meant to tell off the guy who broke her best friend’s heart but unleashed her anger on a perfect stranger instead. And now her world is turned upside down by the captivating man who wants to keep her on the line.

Brian Savage is living a life he’s quickly come to hate-until Sydney’s wild rant has him hooked and hungry for more. Soon the sexy woman on the phone becomes the lover in his bed. But Brian has secrets, and the closer he lets Syd get, the harder it is to shield her from the devastating mistakes of his past . . .

I’d been in Dogwood a month and had been down to the ocean only once. Insane, right? I lived at the beach and I wasn’t experiencing it.

It hadn’t been a priority, and honestly, I didn’t have a lot of free time on my hands.

When I wasn’t picking up shifts at Whitecaps, I was talking on the phone to Brian, shut up in my room or doing it lying on the couch if Tori wasn’t home.

Now I wasn’t shut up in my room or lying on the couch, quilt-covered and heart-shattered. I was no longer talking on the phone to Brian and I wanted to see the ocean. I wanted to feel the sand beneath my feet and skim the waves with my hand.

I had tons of free time tonight while Tori got laid. Might as well make the most of it.

I took the stairs down a level and stepped out beneath the deck.

A couple was sitting on a hammock going at it like their boat was sinking, sloppy-suctioning kisses and need-filled moans spilling into the air.

There had to be a handful of empty rooms in that house. They couldn’t pick one and save me the surround sound?

I followed the sand-covered path down the beach, taking small sips of my daiquiri as I went. Deep voices grew louder the closer I got to the water. I wasn’t paying much attention to them. I was looking ahead and forward to feeling the temperature of the ocean and maybe even finding a couple of pretty shells when the voices grew loud enough to hear clearly.

That’s when it happened.

I stopped, feet frozen and ears alert when one of the voices not only grew loud enough to focus on but also registered in my mind as a voice I’d possibly heard before.

“Don’t know why I gotta keep repeating myself. It wasn’t like that,” the man said, sounding irritated. “She was sweet and good to talk to. Funny and cute about sh!t. Real cute. The fact that she was also a stunner didn’t surprise me. I heard it in her voice. But for the last f*ckin’ time, and I mean this, I’m not saying it again, that’s not what got me. I was f*cked before I even saw her picture.”

“You saying you were gone for a girl you never f*cking met, Brian? Not possible,” the other guy replied.

I sucked in a breath.

A phantom heartbeat fluttered in my chest.

With gentle steps, I moved closer to the voices, reached the end of the path, and peeked around an overgrown bush, spotting the two men standing on the beach.

I watched the one guy, taller than the other, who had his back to me, cross his arms over his chest and say to his friend, “Yeah, that’s what I’m saying. You talk to Sydney one f*ckin’ time and you’ll know where I’m coming from. It was that f*ckin’ good.”

I squeaked then. Not a gasp but a squeak I tried to conceal with a quick hand to my mouth, cup hitting the sand, but it was too late.

They both heard it.

Two pairs of eyes sliced in my direction. I stared back at the one pair coming from the one voice I knew, in my blood and my bones and the breath filling me, I knew that voice and the man it belonged to.

He stared back, eyes narrowing to focus better, focusing enough to make me out where I stood then going round and filling with surprise.

Pain lanced through me.

I wanted to run. To him or away, I didn’t know which urge was stronger, and it felt like I was being pulled in both directions by forces I couldn’t fight so I stood there, staring back as my hand uncovered my mouth and skimmed my throat.

He was moving before I spoke, long legs closing in fast, and before I could blink, he was right in front of me, close enough to smell and feel if my eyes were closed but I definitely couldn’t test that theory right now.

I stared unconsciously into his face, tilting my head back to do so and taking in every inch of him.

Dark hair buzzed close to his scalp, thick eyebrows and deep green eyes, several days’ worth of stubble coating his jaw, which appeared sharp beneath it and full, perfect lips, parted as he breathed slow and heavily.

I knew he was.

“You recognize me?” he asked.

I bit my lip to suppress a moan because, God, that voice. It melted my insides when it sweetly assaulted my ears and turned my bones to jelly. It always had but now, seeing the man behind it and the mouth responsible for it, watching it shape and twist those words so perfectly, I was done.

I blinked when he stepped closer.

“Syd,” he pressed, eyes desperate as they searched mine.

The other man moved beside us and slapped his hand against Brian’s back, who was keeping his eyes focused on me.

I looked to the friend and recognized Exhibit A from Whitecaps, who I now knew went by Cole.

I was in shock. Was he expecting me to speak?

Cole grinned. “Small world,” he chuckled, looking between us. “Small f*cking world. I’ll leave you two alone since you probably have a lot to talk about.”

He gave me a wink then shuffled past me and disappeared down the path, doing just that. Leaving us alone.

I looked up and met pleading greens, filled with a desperation I could feel against my skin.

Questions and confusion swirled in my brain. My stomach was doing nothing but flips and excited little twists.

It was Brian. My body knew Brian and it was acting up impulsively, reacting to that smooth familiar voice and more, and when he reached out and held my face, thumb sweeping over my cheek as his lips whispered, “Wild,” soft and ache-filled, I stopped thinking and feeling altogether and sprang, launching myself at him and into his arms, which curled instantly around me, drawing me nearer and higher until our mouths met in a kiss that hurt and healed so deeply my soul cried out.

Knew it would be.

Thought I was going to start with the f-bomb, right? Nah. Who doesn’t love cake? It’s not just for birthdays, people! I created an entire series around a baker. My top favorites are red velvet and German chocolate. I love a good pound cake, too. And anything with bacon. I’m sure someone out there has created a cake with bacon on it. That would probably rank way up there with me.

Does this count? I’m counting it. NSFW posts are my favorite. Why? Um, because they’re not suitable for work, meaning they are most likely dirty or completely inappropriate in some way or another. And I live for inappropriateness.

This reminds me of Trouble. I love when he first calls Sydney ‘babe’, back at the beginning of their relationship when they only spoke on the phone. He just throws it out there, maybe not thinking anything of it, but she totally gets butterflies and that rollercoaster ride feeling you get in the pit of your stomach. I love this term of endearment. And I especially love it when Sydney uses it on Brian.

My crazy girl! Sydney was such a blast to write. Her dialogue killed me. Her attitude toward life and love was inspiring. She never kept a thought in her head. If she was thinking it, she shared it, and I loved that about her. She lived wild. No one else could pull off that phone call the way she did.  (Rachel McAdams was my muse for Syd.)

J. Daniels is the New York Times and USA Today bestselling author of the Sweet Addiction series and the Alabama Summer series. She loves curling up with a good book, drinking a ridiculous amount of coffee, and writing stories her children will never read. Daniels grew up in Baltimore and resides in Maryland with her family.