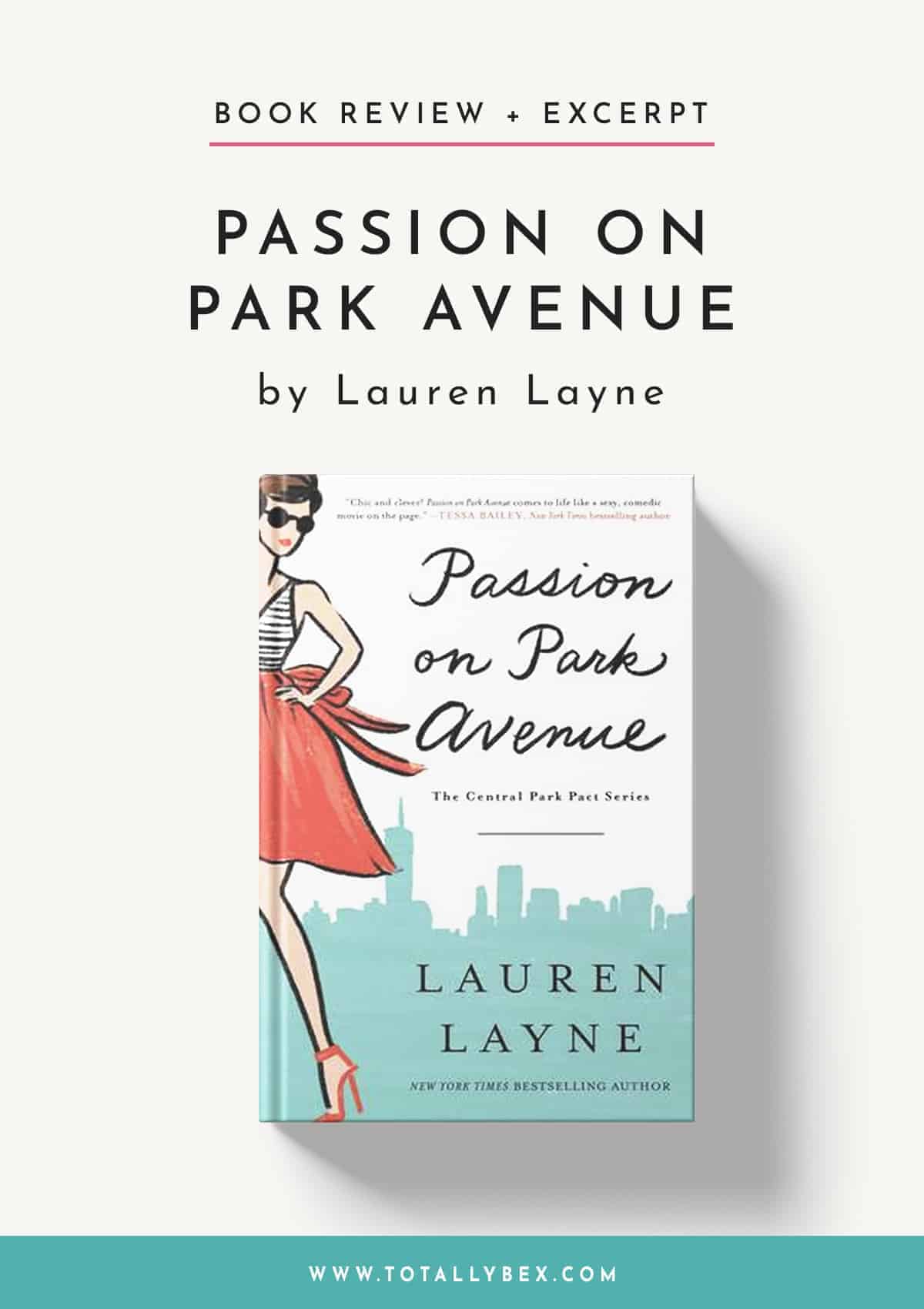 Thank you to Gallery Books for the advanced copy of PASSION ON PARK AVENUE by Lauren Layne. All opinions are my own. 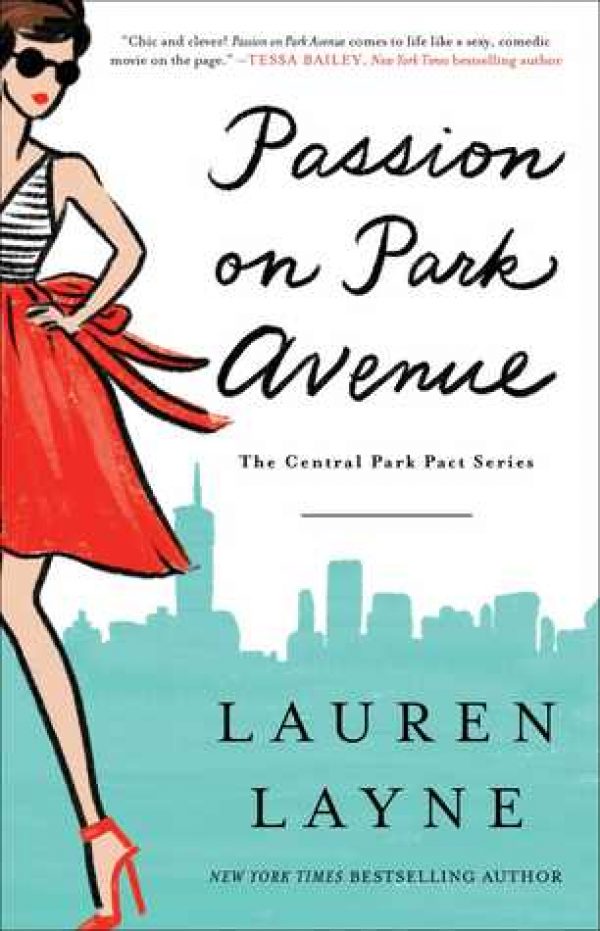 For as long as she can remember, Bronx-born Naomi Powell has had one goal: to prove her worth among the Upper East Side elite—the same people for which her mom worked as a housekeeper. Now, as the strongminded, sassy CEO of one of the biggest jewelry empires in the country, Naomi finally has exactly what she wants—but it’s going to take more than just the right address to make Manhattan’s upper class stop treating her like an outsider.

The worst offender is her new neighbor, Oliver Cunningham—the grown son of the very family Naomi’s mother used to work for. Oliver used to torment Naomi when they were children, and as a ridiculously attractive adult, he’s tormenting her in entirely different ways. Now they find themselves engaged in a battle-of-wills that will either consume or destroy them…

I’ve read a few books by Lauren Layne over the years, but I have to admit, the gorgeous cover immediately sold me on trying this one. Passion on Park Avenue is the story of Naomi and Oliver, but it sets the stage for the entire Central Park Pact series and it’s a solid introduction to the characters and future storylines.

Naomi is a strong, successful businesswoman who comes from humble beginnings. One of her goals in life has been to prove to herself and everyone else that she belongs in the crowd of movers and shakers. After her mother passes away, Naomi finds out that her name has been selected for an apartment in the building where she spent time as a child. The time she spent there was not pleasant and ended abruptly, sending her mother scrambling for a new job and a new place for them to live.

Unbeknownst to Oliver, he shares a past with the vivacious and snarky woman sitting across from him as he interviews her for the potential apartment. He may not recognize her, but she knows exactly who he is—and she has something to prove. They forge an interesting relationship after that first meeting, mostly consisting of Oliver being adorable and Naomi being prickly. Once she starts to get to really know who Oliver has become as an adult and sees what his life is like now, she finally lets her guard down.

I thought that the idea behind the ‘pact’ of the three women made for an intriguing start to the story, but I liked that the situation also serves as the foundation of a lifelong friendship between the ladies. There are times where Naomi is hardheaded and not easy to like, but her friends are more levelheaded and help to bring her back to her senses. I had a hard time connecting with her, however, Oliver makes for a swoony hero and I really enjoyed the chapters from his perspective. Overall, I enjoyed the first book of the series and I am looking forward to the next book!

The first thing Naomi had done after the shock of reading that Brayden Hayes was freaking married was to google the crap out of his wife, desperate for an indication that the Times had been wrong about his marital status. That it was a misprint or he was divorced. The paper hadn’t been wrong. There really was a Mrs. Brayden Hayes.

And she, too, had chosen Central Park over Brayden’s funeral.

Nearly even with Claire Hayes now, and with the sunglasses still providing Naomi anonymity, she dared to sneak a look at the other woman out of the corner of her eye.

Brayden’s widow looked pretty much like the picture Naomi had rummaged up online: a thirty-something Upper East Side WASP. Like Naomi, she wore oversize sunglasses, the Chanel logo glinting in a stray ray of sunshine. Naomi’s trained eye pegged the basic black sheath as St. John, and the basic black pumps Louboutins—identical to Naomi’s.

But unlike Naomi, Claire had a genteel poise about her. Like she’d never said darn, much less dropped an f-bomb. Naomi would bet serious money that Claire Hayes didn’t eat Kraft Macaroni & Cheese straight out of the pan when she was stressed and that Claire had never been so poor that she’d actually once considered taking home a neighbor’s discarded mattress, bedbugs be damned, simply because it was free.

Claire’s placid expression betrayed nothing as Naomi passed her, the glasses too large to reveal any emotion on her face. For that matter, Naomi wondered if women like her experienced emotion at all. It didn’t seem it. The woman was the picture of calm, except for . . .

Brayden’s widow’s hands were clenched tightly in her lap, the fingers of her right hand white-knuckled around the fist of her left hand. But it wasn’t the subdued pink manicure that captured Naomi’s attention. It was the bright red crescent moons beneath the nails.

Naomi had a lifelong bad habit of acting before thinking, and she did so now, crossing to the other woman and sitting beside her on the park bench.

Claire didn’t move. Naomi wasn’t even sure the other woman heard her.

Naomi hesitated only for a moment before slowly reaching over and prying the nails of Claire’s right hand away from her left hand. Little streaks of blood were left in the wake.

Claire looked down in confusion, as though just now registering the pain.

“Does that Givenchy have any Kleenex?” Naomi asked, nodding toward Claire’s clutch on the bench.

Claire didn’t move for a long moment, then taking a deep breath, she calmly reached for her purse, pulling out a travel-size package of tissue.

“We’re wearing the same shoes. Same dress, too,” Claire said, dabbing at the blood on the back of her hand with a tissue, using the same casual indifference of one dabbing up a drop of spilled water.

Naomi nodded in agreement, though Claire’s St. John was a knee-length mock turtleneck, and Naomi’s Chloé was a boatneck that hit at midthigh.

For a long moment, neither said anything.

“I’m supposed to be at a funeral,” Claire said, balling up the tissue and dropping her hands back into her lap.

Naomi was genuinely curious. She knew why she wasn’t at that funeral. But the widow being a no-show . . . that was some serious Page Six–worthy gossip right there.

Claire opened her mouth to respond but shut it when a pretty young woman with dark brown hair walked past them. Naomi waited for the other woman to pass and, when she gave the brunette a closer look, realized the other woman was walking a bit too slowly, as though tempted to approach. She looked vaguely familiar. Naomi was fairly sure they’d crossed paths at a couple of events, though Naomi couldn’t put a name with the face.

Brayden’s widow, however, could. Claire went rigid beside Naomi, even as she called out to the other woman, “Audrey.”

Unlike Claire and Naomi, the brunette wasn’t wearing sunglasses, and Naomi saw her round eyes go even wider. “You know who I am?”

“You’re Audrey Tate. I did a little digging after you called the house that night,” Claire said quietly. “I know you were sleeping with my husband.”

Naomi’s head whipped around in surprise, and then surprise escalated to shock as she realized Claire wasn’t talking to her.

Lauren Layne is the USA Today bestselling author of the Sex, Love, and Stiletto contemporary romances and the all-new Pocket Books series The Wedding Belles. She lives in New York with her husband and spoiled Pomeranian. Visit laurenlayne.com, meet the author on Facebook at LaurenLayneAuthor, or follow her on Twitter @_LaurenLayne.