Thank you for the advanced copy of SAVAGE MAFIA PRINCE by Annika Martin.  All opinions are my own. 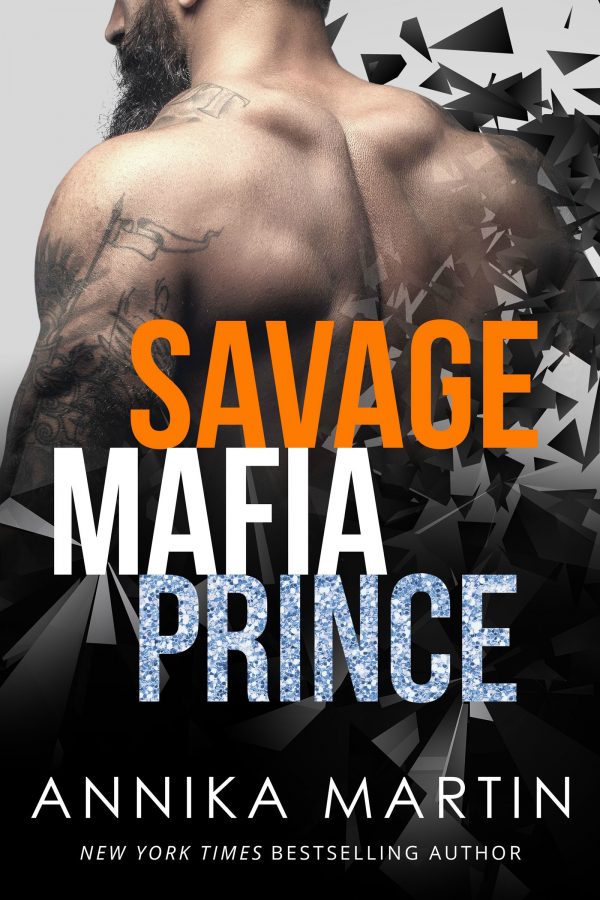 Where is Kiro?
He’s the lost Dragusha brother, heir to a vast mafia empire — brilliant, violent, and utterly savage… and he’s been missing for years.

Ann
I’m supposed to be doing simple undercover research at the Fancher Institute for the Mentally Ill & Dangerous, but I can’t keep my mind off Patient 34. He’s startlingly young and gorgeous, but it’s not just that. He’s strapped way too tightly to that bed. And there’s no name or criminal history on his chart. What are these people hiding? My reporter’s instincts are screaming.

Here’s the other thing: the staffers here believe he’s so sedated that there’s not a thought in his head, but I catch him watching me when nobody’s looking. Our connection sizzles when I enter the room. When our eyes meet, I know he understands me in a way nobody else ever has.

I’m supposed to follow my editor’s orders — I have secrets, too — but everything about Patient 34 is suspicious. How can I not investigate?

Where’s Kiro?  This is the question that I needed to be answered since the first book of the Dangerous Royals series. It was a whirlwind of adrenaline and three books to get here, but I can say I finally have closure.

Kiro is the youngest of the three Dragusha brothers and an heir to an Albanian mob family.  After the death of their parents when he was a just baby, he was taken and has no idea who he truly is.  His older brothers have been reunited and have tried to find answers about his whereabouts, but ran into dead ends at every turn.  Kiro was stolen, illegally adopted, abandoned in the wilderness, raised in a pack of wolves, and later caged as a science experiment.  He is literally a savage in every sense of the word.

Ann is an undercover journalist posing as a nurse.  She knows that there is something suspicious about nearly-comatose Patient 34 in the psyche ward.  She’s a there on another assignment, but she can’t ignore the facts and delves into his history.  Searching for the truth about Patient 34 (Kiro) gets her kidnapped and chased by madmen set on killing the mob heir.

Kiro’s story is heartbreaking from the very beginning.  He had zero chance to be a normal child, teenager, or adult.  He survived the worst circumstances imaginable, so I can understand why Ann would want to help him.  Kiro is so primal with her in every way.  It’s all he’s ever known, so I thought that Martin did an excellent job with his point of view and inner thoughts.

All of that said, I would have liked a little more time with the brothers after their reunion.  Most of the action occurs at the end of the book and it felt a bit rushed.  After taking three books to get to this monumental moment, it felt glossed over in the end.  Maybe I could beg for another book?  Perhaps a novella instead?  It’s a great series, so if you enjoy darker romances with suspense and action, the Dangerous Royals are for you.

“They’re ready for 34,” says Donny, creepy king of the orderlies.

He doesn’t get a name? I grab the cart and push it down the hall to where three orderlies are assembled with stun guns out.

“We go three on standby for hellbeast,” Donny says, looking at me a little too hard. In addition to neon running shoes, Donny has several empty ear piercings and a strategy of showing you who’s boss by looking really hard at your tits. His eyes are small and frontally placed. Predator eyes.

He opens the door and the three of us file in.

I turn to the patient.

And the breath goes out of me.

Patient 34 has a violent halo of dark curls and a short, unruly beard. Sooty lashes line his amber eyes. His energy is…intense, wild, like he was created in some brilliant hellfire. I feel him like I’ve never felt anybody. He’s gorgeous in a furious way. A stunning, suck-you-in-and-spit-you-out way.

The highest restraint is a four-point restraint, but Patient 34 is in more like eight points, arms to waist, waist to bed, wrists to bed, ankles to bed, neck to bed.

He stares at a fixed point on the ceiling like the other B-52-medicated patients, but he feels utterly different, utterly alive. This guy is not blank.

I look up to find nurse Zara watching me sternly, like she caught me doing something wrong. Did I stare at Patient 34 too long?

I get ready to take his vitals, though I have half a mind to look around for a camera crew, like this is one of those elaborate joke shows where they play tricks and see what people do. He’s just…not at all like the others.

According to 34’s chart, he’s on B-52 plus a few muscle relaxants and something extra I don’t recognize. Enough medication for an elephant. I wrap the BP cuff around his shockingly muscular arm. Shocking, because this is the kind of guy who’ll be unhitched from that bed exactly twice a day. When and how is he working out? And what did he do to get himself this level of restraint?

The history section of his chart is blank. There’s no age, though I’d put him at twenty or twenty-one. I can’t even find his goals program chart. “Where’s his goals?”

Donny returns his attention to his iPhone.

This guy—so heavily sedated and restrained with a man like Donny hating on him. How does he endure it? I lay a hand on his arm and feel the warmth of him through my latex glove.

“Escape artist,” Zara mumbles, not looking up from her phone. The people working on the wing aren’t supposed to have their phones, but they all do. They know how to avoid the cameras when they’re on them.

“What’s his escape technique?” I ask. “Does he turn into The Incredible Hulk?”

Neither of them responds. Well, I thought it was funny.

I slip the cuff around 34’s arm, rest my gloved hand on his forearm, and start pumping it

I look at his face again.

And the world stops.

Because 34 is there—really there. He’s watching me with intelligence, lips quirked like he thought my Hulk comment was funny.

“He doesn’t know what you’re saying,” Zara says from the corner, like I’m this huge idiot. “He’s not going to answer. Read his chart.”

I read the f*cking chart, I think at her. Why don’t you look at his f*cking face? But when I look back down, 34’s eyes are blank again, and the shadow of a smile is gone. Was I hallucinating? “It seemed like he was there for a second.”

“He hasn’t had a coherent thought in his head for months,” Donny says. “And he never will again.”

I look back down. His gaze is fixed on the ceiling. Back to being a heavily sedated lion.

I’m a NYT bestselling author living a stone’s throw away from the Mississippi with my awesome husband and two cats in a home full of plants, sunshine and books. I'm heavy into writing love stories about criminals--some of them are dirty and fun (my Kinky bank robbers!) others are dark and intense (Prisoner!)