Thank you for the advanced copy of I’VE SEEN YOU NAKED AND DIDN’T LAUGH by Eden Butler.  All opinions are my own. 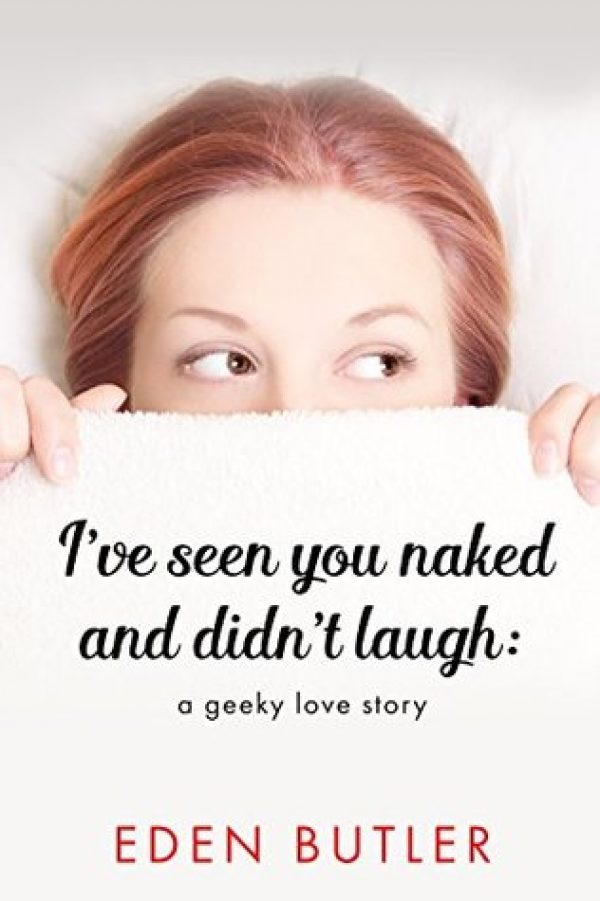 Raine Quinn was a huge disappointment to her haters.

She wasn’t supposed to make it out of Waco, TX.

Will Callahan liked to call himself the younger, hotter Shatner, minus the ham acting and distracting toupee. He loved everything comics, he loved playing the hero of the beloved, defunct space western, AURA and he loved his best damn friend, Raine Quinn.

Raine and Will shot up the Hollyweird ranks together. They became stars, Geek legends and over the years, family. But one night, with the meddling of their dearly departed friend, too many shots and too much time reminiscing, Raine and Will cross a line…and it’s one they can’t jump back over.

I read this book based on the title alone.  See, I have a secret (or maybe not-so-secret) love of geeky romances.  Stories that are cute, quirky, and off-beat are some of my favorite to read.

I’ve Seen You Naked and Didn’t Laugh has elements of cute and quirky, but at its heart is an unrequited love story between Raine and her best friend, Will.

Originally from Waco, Texas, Raine can’t wait to get to Hollywood and become an actress.  She moves with her best friend and lands a few small parts.  In a twist of fate, she meets a producer and his wife, who help her find her footing and take the struggle out of her career.  At the same time that she meets the producers, she also meets Will.

Will is an all-American, hunky, boy-next-door actor and the best friend Raine has ever had.  He’s protective of her and their friendship, even if she doesn’t realize how deep his feelings go.  After a night of drunken bliss, their friendship falls apart, but they’re both too stubborn to work it out.  Cue the angst!

I’ve Seen You Naked and Didn’t Laugh is such a fun title, but I am not sure it completely fits the story.  While there are funny and cute parts, I think it is much more angsty than I imagined it would be.  Once I realized this, I settled into the story and really enjoyed it.  The banter helped to ease the angst, for sure.

Will and Raine’s childish behavior made me want to smack some sense into them both at times, but I loved seeing their story unfold, both in real-time and in flashbacks.  I was rooting for them to work it out.

After a decade in Hollywood, there is a lot of history and I enjoyed getting to know them and their friends.  I could have used a little more geekiness in the story, but overall, I enjoyed it.  This is my first book by Eden Butler and I will definitely be reading more!

Will had the fattest bottom lip, the softest, pinkest skin that darkened in the center. I stared at that small discoloration, trying to ignore the memory of how his mouth tasted on my tongue all those months ago as he dropped my hair and slid an arm behind my head on the truck seat. He came so close now that the fine hairs on his arm tickled against my ear. “You aren’t just anyone.” Will touched my face and I let him maneuver my head, urge me to move my chin, angle my cheeks between his long fingers before he delivered his line. “There’s no one like you.”

There were two small seconds before the kiss came. I counted them both and it felt like everything was happening in slow motion. The soft tickle of his fingertips against my jaw. The slow, sweet breath that fanned against my open mouth when he inched closer. The low, wild sound of his throat vibrating when he finally kissed me.

It was an act. I knew that. There were fifty people around us watching, filming, lighting the set, assuring that the sound was optimal. But just then as Will kissed me…well, as Tristan kissed Isolde…I pretended that we were alone, that we were back in my house, drunk and blissfully un-mindful of how epically stupid it was to sleep with your best friend.

Just then, I let Will move his mouth over mine and thought about the sweetness of his breath and how warm, how strong his tongue felt in my mouth. We went on kissing, reacting, setting up the steps that would lead to the rest of the scene. And I forgot about the script and the audience. I kissed Will back and let that chemistry Coop had mentioned the night before spill out from my body and shoot into Will’s. I moved when he pulled on me. I reacted when he subconsciously asked for a response. He led, I followed and in the progression of the scene, Tristan drew Isolde onto his lap, tugging at her shirt, slipping fingers up her back, pulling on the collar to expose her bare shoulder.

And then, his hand came to my breast, those long, perfect fingers gripping, tweaking until I could not help myself. Until I threaded my fingers into his hair and let Will squeeze and touch and take whatever of mine he wanted.

“God…” I managed, holding his mouth to my neck, moving up and over his lap, pressing him closer, harder against my skin. “Oh God.”

“Baby…” I’d never heard that pet name from Will. He’d never referred to anyone he was with as his baby. He’d only ever called me Rainey or Pinkie or sweetie and none of those times had those pet names held any of the sweetness or need that he’d just used to call me that.

Tristan and Isolde. Not us.

He kept kissing me, taking and I let him go on, cursing myself, my stupid logic when I heard Cooper repeat over and over again, “Guys, that’s a cut. Cut!”

Will followed, leaned toward me, seeming unwilling to stop kissing me when I pulled away, shaking my head to clear away the tension tightening my body. When I looked over to Cooper and JoJo on the other side of the camera, Will finally stopped trying to kiss me.

“That was perfect,” Coop said, leaning back in his chair, not remotely ashamed at how wide he smiled at us. “That was just…perfect.”

I only vaguely heard him and decided that grin would pull me out of the moment so I focused on Will, how he rested his hands on my hips, how he hadn’t removed them even though Cooper had cut the scene.

“It was good,” I told him, lacking anything remotely sensible to say. I didn’t move, loved too much how close we were, not willing to separate from Will. I had gone months and months not speaking to him and though I knew I needed to retract my limbs from his lap, that I had to keep myself distant so I could begin to stop wanting him, it felt too good to have him so close. I didn’t want to move.

My mind did things to me when Will was around. There were moments that I was certain he’d gone on looking at me too long, that there was something in that look that meant more than honest friendship, but I’d always managed to remind myself that I was not his type. I was his friend and that’s all I’d ever be, that drunken stupid night notwithstanding. But just then, with Will clinging to me still, with our bodies pleasantly entwined, I could have sworn the look he gave me, that amazed, satisfied expression wasn’t a figment of my desperate imagination.

“Rainey.” It was a breathless sound that didn’t sound like my name at all. Those soft, slow syllables that made my name sound like a song had come from my best friend. It sounded like a promise. It felt like a dream and when I looked up at him, when he touched my cheek, made to guide my head again, bring my mouth closer to his despite there being no running camera filming it, I was sure Will Callahan, not Tristan was about to kiss me.

And then, while the crew reset and ignored us, just as Will was tugging me closer and the moment was amping up, the tension doubling as I held my breath, waiting to see what he’d ask of me next, Will suddenly froze and let out a soundless gasp, as though someone had just flicked a switch on in his head. For several long seconds he just sat there, his mouth hanging open, his eyes searching my face but not really seeing me.  Then, just as suddenly, he dropped his hand, unceremoniously moved me off his lap and hurriedly left the truck without so much as a backward glance in my direction.

Eden Butler is an editor and writer of New Adult Romance and SciFi and Fantasy novels and the nine-times great-granddaughter of an honest-to-God English pirate. This could explain her affinity for rule breaking and rum. Her debut novel, a New Adult, Contemporary (no cliffie) Romance, “Chasing Serenity” launched in October 2013 and quickly became an Amazon bestseller.

When she’s not writing or wondering about her possibly Jack Sparrowesque ancestor, Eden edits, reads and spends way too much time watching rugby, Doctor Who and New Orleans Saints football.

She is currently imprisoned under teenage rule alongside her husband in southeast Louisiana.