Thank you for the advanced copy of PRETTY WHEN YOU CRY by Skye Warren.  All opinions are my own. 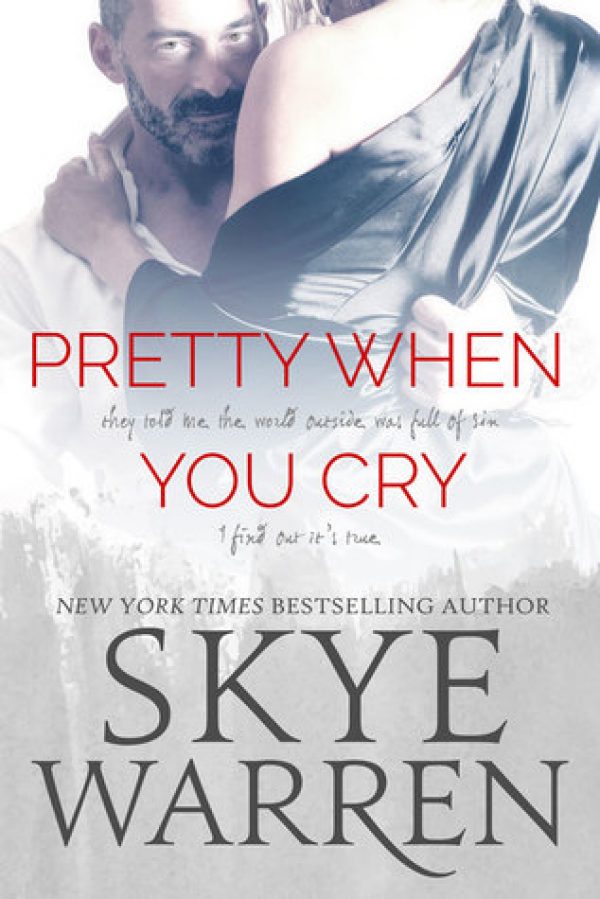 I came from a place of dirt floors and holy scriptures. They told me the world outside was full of sin, and the first night I escape, I find out it’s true. Ivan saves me, but he does more than that. He takes me. He makes me his own girl.

My conditioning runs too deep. Ivan sees what I am.

That’s the thing about showing a mouse to a cat. He wants to play. And it’s terrifying, even for me. Because the only thing darker than my past is his.

Pretty When You Cry

Fair warning: This is not a romantic, heartwarming romance. The characters are deeply and emotionally flawed after years of abuse and conditioning. While their love may be unconventional and a bit deviant, they are, in fact, perfect for each other.

Pretty When You Cry by Skye Warren is the dark, twisted, and intense story of Candace and Ivan. It grabbed me from the very first page, where we are introduced to the heroine, Candace.  She has been raised by a cult, and she has been indoctrinated and brainwashed her entire life.  She manages to escape at the age of 16, and ends up alone and scared in an unfamiliar city.

While Candace is wandering the streets looking for shelter, Ivan, owner of a seedy strip club, saves her. He takes her in, providing food, shelter, an education, and constant protection. She may be safe, but she has essentially replaced one captor for another.

This is just the beginning of what I thought was an interesting and complex relationship between Ivan and Candace.  They are both products of prolonged abuse, and carry deep emotional and physical scars.

Their past definitely influences their sexual needs–Ivan requires dominance, while Candace prefers pain with her pleasure. Truthfully, their sexual dynamic is one that I’ve never read in a book before, and I found it fascinating.

This is definitely the darkest book of the Stripped series, and I honestly felt like a voyeur while reading parts of it.

My only complaint is that I would have liked a little more depth into Ivan’s background, since it is only touched upon and not really discussed. However, the story and the writing are excellent.

Pretty When You Cry is one of my favorite books by Skye Warren, and I would recommend it to anyone who likes dark, twisted, and unique romances.

So far, a city looks exactly how I thought it would—gutted buildings and dark alleys.

A den of wickedness.

This morning I woke up on my floor mat in Harmony Hills. Sunlight streamed through the window while dust rose up to meet it. The white walls somehow kept their color despite rough dirt floors.

A desperate trek through the woods and a series of bus rides later, I made it to a city. This city. Tanglewood. It could have been anywhere. They’re all the same, all sinful, all scary—and the only thing that makes this one special is that I ran out of money for bus tickets.

My shoes are made of white canvas, already fraying and black from the grime of the streets. I made these shoes by hand when I turned twelve, and the heel on the left side has never fit quite right. But the bamboo soles lasted for years in the hills. Now they’re cracking against concrete. I can feel every lump in the pavement, every loose rock, every rounded hump as the sidewalk turns to cobblestone and then back again.

That’s not the worst part.

There’s someone following me. Maybe more than one person. I try to listen for the footsteps, but it’s hard to hear over the pounding in my ears, the thud of my heart against my chest. Panic is a tangible force in my head, a gritty quicksand that threatens to pull me down.

I could end up on my knees before this night is over.

But I don’t think I’ll be saying my evening prayers.

Men are standing outside a gate that hangs open on its hinges. They fall silent as I walk close. I tighten my arms where they are folded over my chest and look down. If I can’t see them, they can’t see me. It wasn’t true when I was little, and it’s not true now.

One of them steps in front of me.

My breath catches, and I stop walking. My whole body is trembling by the time I meet his eyes, bloodshot red in a shadowed face. “What’s your name?” he asks in a gravelly voice.

“Now that’s not very polite, is it?” Another one steps closer, and then I smell him. They couldn’t have showered in the past day or even week.

Cleanliness is a virtue.

Being quiet and obedient and small is a virtue too. “I’m sorry. I just want to—”

I don’t know what comes next. I want to run. I want to hide. I want to pretend the past sixteen years as a disciple of the Harmony Hills never happened. None of that is possible when I’m surrounded by men. I take a step back and bump into another man. Hands close around my arms.

A sound escapes me—fear and protest. It’s more than I would have done this morning, that sound.

I’m turned to face the man behind me. He smiles a broken-toothed smile. “Doesn’t matter what you want, darling.”

My mouth opens, but I can’t scream. I can’t scream because I’ve been taught not to. Because I know no one will come. Because the consequences of crying are worse than what will happen next.

Then the man’s eyes widen in something like fear. It’s a foreign expression on his face. It doesn’t belong. I wouldn’t even believe it except he takes a step back.

My chest squeezes tight. What’s behind me? Who is behind me that could have inspired that kind of fear? The men surrounding me are monsters, but they’re backing off now, stepping away, hands up in surrender. No harm done, that’s what they’re saying without words.

I whirl and almost slip on a loose cobblestone.

The man standing in front of me is completely still. That’s the first thing I notice about him—before I see the fine cut of his black suit or the glint of a silver watch under his cuff. Before I see the expression on his face, devoid of compassion or emotion. Devoid of humanity.

“We didn’t know she worked for you,” one of the men mumbles.

They’re still backing up, forming a circle around us, growing wider. I’m in the middle. I’m the drop, and the men around me form a ripple. Then they fade into the blackness and are gone.

It’s just me and the man in the suit.

He hasn’t spoken. I’m not sure he’s going to. I half expect him to pull out a gun from somewhere underneath that smooth black fabric and shoot me. That’s what happens in the city, isn’t it? That’s what everyone told me about the outside world, how dangerous it is. And even while some part of me had nodded along, had believed them, another part of me had refused.

There had to be beauty outside the white stucco walls. Beauty that wasn’t contained and controlled. Beauty with color. Only apparently I was wrong. I haven’t seen anything beautiful—except him.

He’s beautiful in a strange and sinful way, one that makes me more afraid. Not colorful exactly. His eyes are a gray color I’ve never seen before, both deep and opaque at the same time. The building itself is beautiful too with its wrought iron gate around a large courtyard. The fountain in the center is broken, but that only adds to the mystique.

The marquee sign reads Grand, a flash of neon pink against the black night.

He steps closer, the light from the sign illuminating his face, making him look even more sinister. “What’s your name?”

I couldn’t answer those other men, but I find something inside for him. I find truth. “I’m not allowed to say my name to someone else.”

He studies me for a long moment, taking in my tangled hair and my white dress. “Why not?”

Because God will punish me. “Because I’m running away.”

He nods like this is what he expected. “Do you have money?”

I have twenty dollars left after bus fare. “Enough.”

His lips twist, and I wonder if that’s what a smile looks like on him. It’s terrifying. “No, you don’t,” he says. “The question is, what would you do to earn some?”

He laughs, and I see that I was wrong before. That wasn’t a smile. It was a taunt. A challenge. This is a real smile, one with teeth. The sound rolls through me like a coming storm, deep and foreboding.

He studies me. “Pretty name.”

His voice is deep with promise and something else I can’t decipher. All I know is he isn’t really talking about my name. And I know it isn’t really a compliment. “Thank you.”

He turns and walks away before I can answer. I can feel the night closing in on me, the sharks in the water waiting to strike. It’s not really a choice. I think the man knows that. He’s counting on it. Whatever is going to happen inside will be bad, and the only thing worse is what would have happened outside.

I hurry to catch up with him, almost running across the crumbled driveway, under the marquee sign for the Grand, past the broken fountain, desperate for the dubious safety of the man who could hold the darkness at bay. It’s the same thing that kept me in Harmony Hills for so long—fear and twisted gratitude.