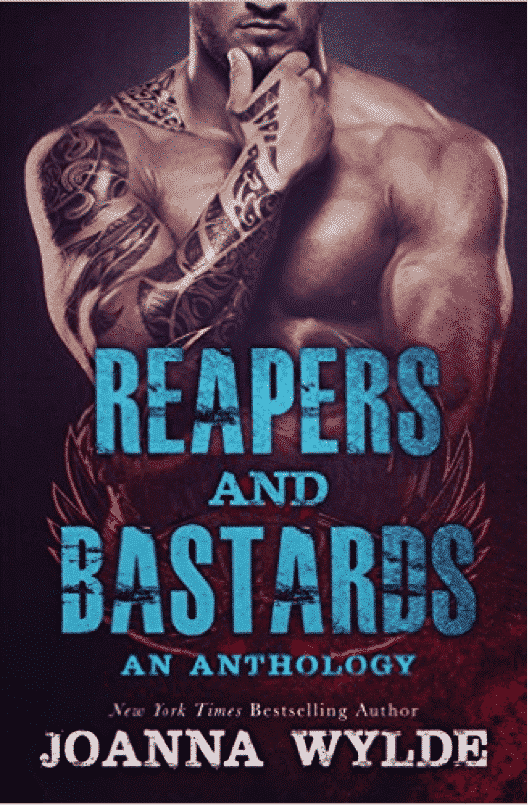 Have you been wanting more Reapers and Bastards?  Well, your wait is over today!

1-Click this Anthology of short stories from Joanna Wylde for ONLY $0.99

I passed through the living room and started down the hallway toward the kitchen.

“In the back,” she replied, her voice faint. Entering the kitchen, I knew something was wrong as soon as I saw her face. Her eyes were red and puffy, and she seemed out of it—almost dazed.

“What the f*ck’s going on?” I asked. She jumped, looking toward me with something like fear in her expression. Jesus, had someone hurt her? A burst of adrenaline rushed through me—nobody touched my woman. I’d f*cking kill them. She didn’t say anything, though. “Marie?”

She shook herself, almost as if she needed to wake up.

“Sorry, I was sort of lost in my thoughts.”

She stared at me for several seconds, her mouth tight.

Great—words every man loves to hear. So much for my “welcome home” blow job.

“About what?” I asked warily.

“Sit down,” she murmured, glancing away from me. “You want a beer?”

Up to that point, a beer had been damned high on my list of priorities. Now? Not so much. I pulled out a chair at the big wooden block that served as our kitchen table and sat down with a thump, leaning back. Then I crossed my arms over my chest.

“So let’s talk,” I told her, forcing myself to stay patient. Marie swallowed, then reached for the cup of tea sitting on the block in front of her, taking a nervous sip.

“Okay, so here goes,” she said quietly, refusing to look at me. “We’ve got some big changes ahead of us. You need to remember that it just happened, babe. It’s not like I did it on purpose. Please remember that.”

Other Books in The Reapers Series

Joanna Wylde is a New York Times bestselling author and creator of the Reapers Motorcycle Club series. She currently lives in Idaho.