Thank you for the advanced copy of The Hot Shot by Kristen Callihan. All opinions are my own. 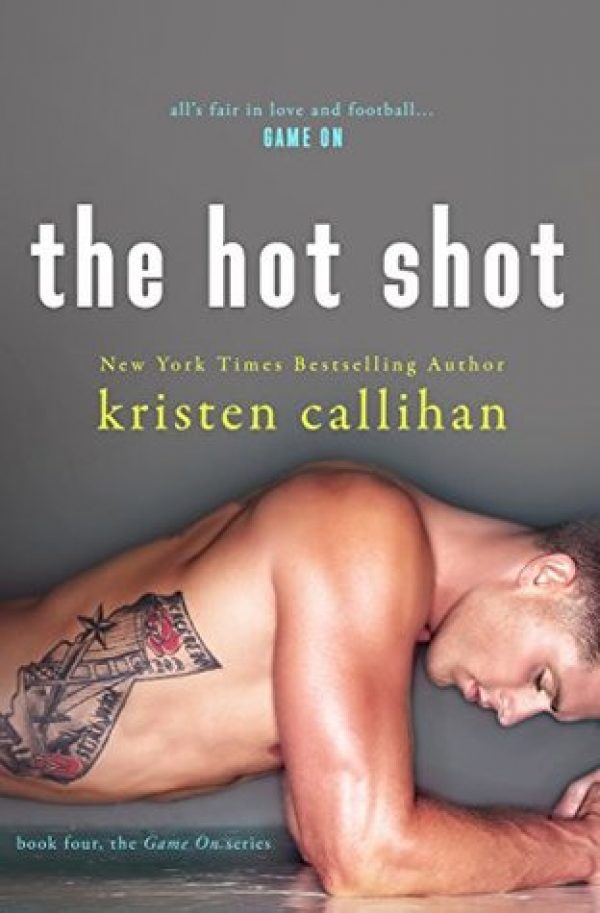 First we were friends. Then we were roommates. Now I want more…

What can I say about Chess Copper? The woman is capable of bringing me to my knees. I know this about five minutes after getting naked for her.

No one is more surprised than me. The prickly photographer my team hired to shoot our annual charity calendar isn’t my usual type. She’s defense to my offense, a challenge at every turn. But when I’m with her, all the regrets and darkness goes away. She makes life fun.

I want to know Chess, be close to her. Which is a bad idea.

Chess is looking for a relationship. I’ve never given a woman more than one night. But when fate leaves Chess without a home, I step up and offer her mine. We’re roommates now. Friends without benefits. But it’s getting harder to keep our hands off each other. And the longer we live together the more I realize she’s becoming my everything.

Trick is… Now that I’ve made her believe I’m a bad bet, how do I convince her to give this player a true shot at forever?

by Kristen Callihan
Game On Series

I don’t know how he did it, but Finn Mannus may have just ousted Drew Baylor from the top spot as my favorite sports romance hero. He may be inexperienced in the art of dating, but he is certainly not lacking when it comes to making the reader fall in love with him. In fact, The Hot Shot is pure perfection from the witty and snarky banter to the sweet and sexy friends-to-roommates-to-more romance.

This is one of those books you feel in your heart as well as in your gut as you are reading. With every misstep in the conversation or inadvertent hurt feeling, I felt my chest getting heavy. When the attraction couldn’t be denied any longer, my stomach dipped and I got tingles. No lie and only Kristen Callihan can do that so well. It happened in The Hook Up and I am so happy to say that it happened again in The Hot Shot.

Finn and Chess make the perfect sparring partners from the moment they meet. I loved every second of their bickering and zingers that were flung. I also loved when things take a turn for the serious and the barbs didn’t sting quite as much. Neither one of them has had a long-lasting relationship, but that doesn’t matter since they get to figure it out together—and fortunately, we get to come along for the ride.

This is definitely a slow-burning romance. And the sexual tension?  It’s so thick at one point, you can almost cut it with a knife. (Come to mama, you’re speaking my language!) I certainly hope there will be more of this series to come. There are several players who need their own book and in the meantime, I will be waiting (im)patiently for more!

Grumbling, I toss on some black lounge pants and my oversized Tulane t-shirt and head to the drugstore.

My head throbs by the time I get there, and my insides are writhing. I rest my hand against my lower stomach and grab a basket before calling James to complain.

“I swear,” I tell him as I grab a bottle of painkillers. “It’s like this entire day has been cursed.”

I roll my eyes, even though he can’t see me. “Laugh it up. Meanwhile, it feels as if someone is playing Battleship in my uterus.”

“Poor Chessie bear. At least we know why you were in such a foul mood.”

A flush washes over my cheeks. “Yeah.” Lie. Lie. Lie. A tub of salted caramel gelato makes its way into the basket.

“Tell me you’re getting some gelato,” James says.

I smile. “Just grabbed it.”

I find the feminine products aisle and search for my brand. “I’m going to go home, take a long bath with my gelato, and forget this f*cking day.” Forget Finn. “And then I’m going to go on Amazon and buying a freaking year’s supply of tampons so I don’t have to make these kinds of emergency runs anymore.”

A low, deep chuckle rumbles from behind me, and all the tiny hairs lift on my arms.

“But you’ll still need your gelato,” a familiar—f*ck me, seriously?—voice points out.

My insides swoop even as my cheeks burn.

I slowly turn on one heel. “The plague,” I say, glaring up at Finn Mannus’s smiling face.

“Who is that?” James nearly yells now.

James’s squawks of protest cut off as I hit the end button.

“Are you stalking me, Mannus?”

Finn a rests his hands low on his lean hips. “Having a healthy amount of conceit myself, I have to admire yours, but no, buttercup. My buddy Woodson lives a few blocks away. It’s poker night. I’m stocking up on beer.”

It’s only then I notice a twelve pack tucked under his other arm.

“And tampons?” I ask, with a pointed look around the aisle we’re standing in.

“Not tonight,” he says easily. “Though we used to keep a pack of them back in college. Light flows were perfect for stopping up bloody noses.”

A snort escapes me. “Now there’s a visual.” Somehow, I’ve taken a step closer to him. He’s freshly showered, the golden brown strands of his hair still damp at his temples. And I wonder if he’s just come from the gym or practice. “So back in college you went and bought these tampons?”

“Nah,” he says with a cheeky smile. “I’d ask one of the girls hanging around to get me some.”

“Of course you did.” My nose wrinkles with annoyance.

“Hmm…” I eye him, trying not to return his smile. If only because it’s more fun when he teases. “So why are you in this aisle now, if not for potential nosebleed needs?”

“That’s easy.” He steps closer, a warm wall of muscle and clean scent. “I heard your voice.”

For a second I just blink. “You recognized my voice?”

His gaze darts over my face as if he’s trying to get a read on why I’m gaping at him. “Not to be…ah…rude, but you’re loud when you talk on the phone.”

“Yeah, but… You recognized it.” We’d only just met. It occurs to me that I’d recognized his both times he’d snuck up on me. Then again, his voice is distinctive, flowing like hot honey when he’s relaxed or hammering down like iron to rock when he’s taking command of a situation.

A soft flush of pink tints the tips of his ears. If I wasn’t staring at him, I might have missed it. He shifts his weight. “Was I not supposed to?”

He grins then. “You’re cute when you’re flustered.”

Kristen Callihan is an author because there is nothing else she'd rather be. She is a three-time RITA nominee and winner of two RT Reviewer's Choice awards. Her novels have garnered starred reviews from Publisher's Weekly and the Library Journal, as well as being awarded top picks by many reviewers. Her debut book FIRELIGHT received RT Magazine's Seal of Excellence, was named a best book of the year by Library Journal, best book of Spring 2012 by Publisher's Weekly, and was named the best romance book of 2012 by ALA RUSA. When she is not writing, she is reading.