Thank you for the advanced copy of THE SURVIVING TRACE by Calia Read.  All opinions are my own. 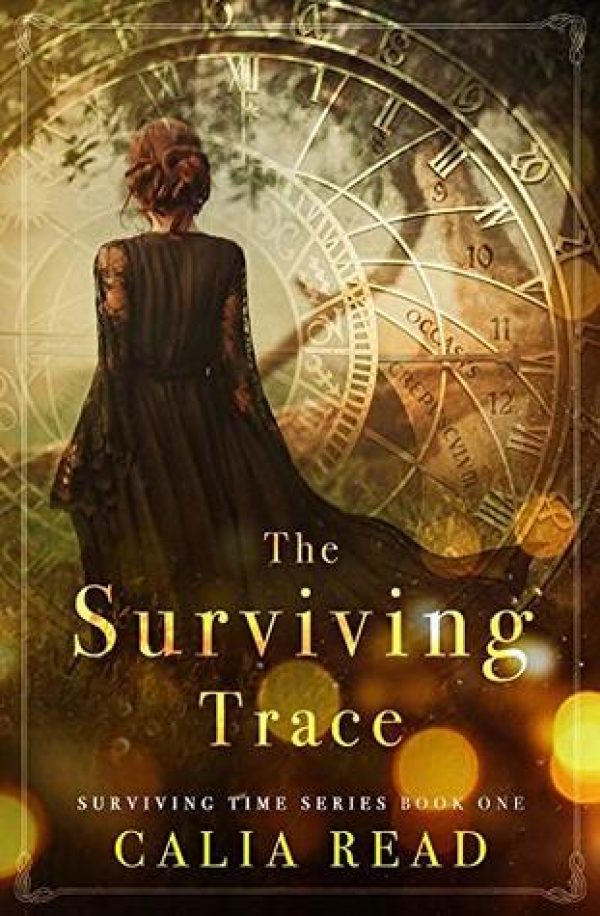 Our love is timeless.

Will is my fiancé. The shy man I met years ago in college. The person I’m supposed to spend the rest of my life with.

Etienne says he’s my husband and the year is 1912. He can’t stand the sight of me, but I don’t know why.

Oh, and he’s one of the men from the picture.

I’ve done the impossible and have become trapped in time and I know Etienne is my key to going home.

The more time I spend with Etienne, the further I fall for him, until I’m questioning which time I belong in and if the life I left behind is the one I truly desire.

All I know for certain is I need to survive time.

I need to survive love.

And I need to make it out on the other side alive.

I’ve been a fan of Calia Read’s writing since I read Unravel (one of my top 10 reads in 2015!).  Her writing is gorgeous, she weaves spectacular tales, and she loves to throw in all the twists and turns.

What starts as a vivid dream quickly turns into reality for the heroine of The Surviving Trace, Serene.  Always a lover of the past, Serene owns an antique store with her best friend.  She discovers a photograph of four men taken in 1912—one of which is the man from that unforgettable dream.  A few days later she is transported back in time and finds herself married to the man from her dream/the photo.

This story is purely immersive and impossible to put down once the story picks up steam.  The hero and heroine are fantastic and the storyline is so unique.  It’s a suspenseful mystery and an angsty romance all in one.

Read has once again given us a well-written, passionate, and totally believable story.  I haven’t read a time-travel romance since Outlander, but I am so glad I read this one!  I can’t wait for the next installment of the story (this is book one of three).

“When you dance, what is your dance of choice?”

I continue to walk around the room, capturing every piece of beauty this spacious room has to offer. In all my life, I don’t think I’ve ever seen anything more breathtaking. The servants keep Belgrave spotless from top to bottom, but with the sunlight pouring in through the windows I can make out the dust motes in the air. They move so delicately, I swear they’re mocking me over my awkward movements and showing me the dance partner I should be. The whole time I peruse the room, I feel Étienne’s eyes on my body.

Instead of answering, he turns the question around on me. “How do you dance?”

I turn and face him. His question makes me smile faintly. “A lot different from the Hesitation Waltz you’re trying to teach me, I’ll tell you that much.”

“I don’t even know where to begin.”

I freeze in place. His voice is good-natured. Still, I hesitate. And then his eyes glint with a challenge that makes my body stiffen.

He slowly approaches. “Why not?”

“Because,” I reply lamely.

I know what Étienne’s doing—he’s trying to get a rise out of me. If I knew what was best, I would back down. Instead, I step closer, arching a single brow. “Why do you care how I dance?”

His challenging gaze never wavers. “What you don’t understand about my world, I show you. The least you can do is return the favor.”

“I’m sure there are enough women who have returned the favor to last you a lifetime.”

He turns and walks across the room. “Oh, of course.”

I ignore the jealousy that shoots through me and snort. “Thought so.”

“Are you always this arrogant?” he asks as he grabs one of the armless chairs lined against the wall.

I don’t answer him and warily watch as he brings the chair over and places it directly in front of me. Right in the middle of the room. The legs land on the floor with a resounding thud. He makes himself comfortable in the chair, his legs crossed at the ankle and hands linked behind his neck. His wicked grin sends off warning bells in my head.

His lips say one thing, but his eyes say something else entirely.

You’re too shy. You’ll chicken out,they all but scream.

He’s counting on me saying no. If he thought I’d agree, he would’ve never issued the challenge. His estimation of me isn’t too far off. My heart’s pounding at the thought of dancing in front of him. For many reasons.

“What? No. I think what you’re asking me to do is ridiculous.”

“I’ve already told you. People in my time dance differently than people in your time. On top of that, our music is… very distinct.”

“Dance without music,” he suggests.

“Why?” Étienne smirks. “I never thought you would back down from a challenge,” he says, his voice going up an octave.

“If that’s your best attempt at imitating my voice, you need to practice harder.” I cross my arms and cock my head to the side. “You’re just trying to get back at me for the day at the creek.”

I take a deep breath and count to ten, but that doesn’t work. The truth is, I’ve never been good at backing down. At anything. My pride always has always been bigger than logic. And right now, all I can think about is taking that smug expression off his face. I want to turn Étienne’s controlled world upside down.

Étienne lifts a single brow in a gesture that says, Well?

His eyes widen imperceptibly. The idea that I may have usurped Étienne takes some of the sting out of giving in.

Seconds tick by and I don’t move a muscle. I feel ridiculous. Who can dance in complete silence while someone watches them? I feel as though Étienne’s going to judge every move I make.

Why did you agree to this? my mind screams. Tell him you’ve changed your mind and take the loss.

Étienne smirks, appearing pretty satisfied with himself. He must know that I want nothing more than to bolt out of this room.

If he was shocked when I agreed to this, what would his reaction be if I go through with it? I want to rise to Étienne’s challenge with one of my own. I know I shouldn’t, but I can’t help myself. The idea is like dangling forbidden fruit in front of me. Of course I’m going to try to take a bite.

My hands curl into fists. I take a deep breath and relax my hands to my sides.

Since there’s no music, I lightly hum a song that’s wildly popular in my time. Deliberately, I choose one that’s fun, that makes my heart race in excitement. I hear the rhythm and lyrics in my head and focus on them. I stare at the doors clear across the room, the white walls and the curtains pulled back from the windows. I look at everything but Étienne.

If I look at him, I’ll lose my courage; I feel silly. However, the longer I hum the tune, the more at ease I become.

When the song ends and I hum a new one, my eyes meet Étienne’s. At first, he watches me with open curiosity, a small smirk playing on his lips. But when I move my hips, his eyes zoom in on the action and stay put for a few seconds before they lazily drift up my body. My skin tingles.

And then, somewhere along the way, his smirk fades. And somehow, I’m inching toward him.

The casual body language he possessed only a minute ago is gone. He’s sitting up straight. His jaw is clenched, and his brows form a tight V.

I can’t say the same for myself. My body feels pliant as if it’s soaking in all the attention Étienne directs my way. As I move closer, he stretches his long legs.

“Are you good, Étienne?”

I don’t know, yet I can’t seem to stop myself. Never in my life have I been considered a tease. Not even with Will.

His name should be a bucket of cold water dumped over my head. But my body keeps moving, and my eyes are fixed on Étienne, watching as his hands flex and curl into fists, as if he’s stopping himself from grabbing me.

My confidence flourishes. I glide my hands up and down my curves. Étienne’s Adam’s apple bobs when he swallows. It’s only when I’m standing between his legs that I stop dancing.

Étienne tilts his head back, our eyes never breaking contact. “I like this dance,” he says gruffly.

Get up, my mind whispers. Get up right now! You have a fiancé at home!

I can’t move though. How I feel is confusing, because on paper, Étienne’s mine. On paper, I share his last name. On paper, I’m his wife.

In my heart, none of that is true.

“Serene,” Étienne says gruffly, his hands balled up into fists at his sides.

“Hasn’t a woman ever danced for you?”

He swallows loudly. “No. Nothing quite like this.” His voice is a deep rasp.

I draw back an inch and brush a finger down his throat, across his rapid pulse. He sucks in a sharp breath but doesn’t pull away. One of us needs to though.

“You stopped dancing,” he says.

“The song is over,” I reply quietly.

I smile at his eagerness. But that smile quickly fades; the self-possessed man who always seems in control of every aspect of his life is losing his power. His eyes are a bit glazed over. His hands, still curled into fists at his sides, unclench. They lift and are inches away from my waist before he snatches them back.

Soon I hear only our labored breathing quietly mingling. The dance is over. I’ve won this challenge. But I’ve lost all function in my legs, and instead of trying to gather my strength to move away, I deliberately lower onto his lap.

He hisses in a sharp breath. Almost reflectively, he grips my hips, holding me immobile. “Don’t move.”

I can’t feel a single thing except for Étienne. The heat of his body.

We stare at each other in shock. I make no move to get off Étienne’s lap, and he doesn’t take his hands off of me. With my corset on, his big hands practically encircle my waist.

“Serene…” He swallows, and I watch in fascination as my hands curl around his shoulders and toward his neck. “What are we doing?”

Calia Read lives in Texas with her husband and their five kids.