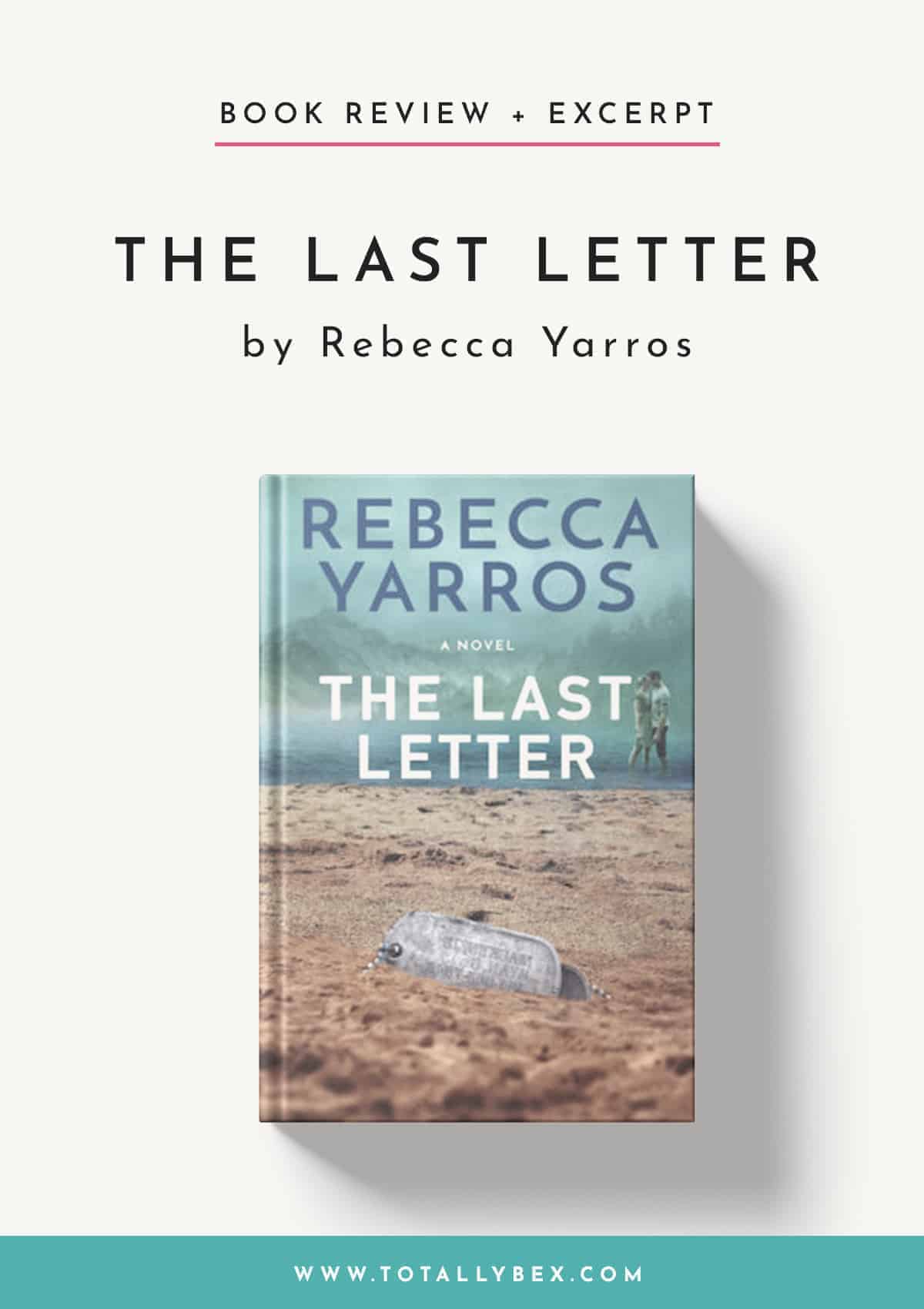 Thank you to Macmillan for the advanced copy of THE LAST LETTER by Rebecca Yarros.  All opinions are my own. 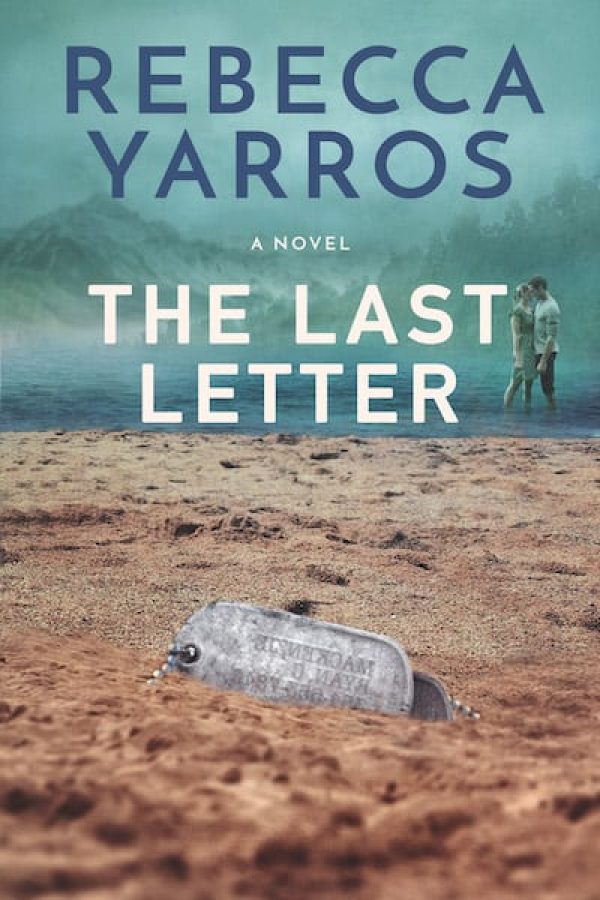 If you’re reading this, well, you know the last-letter drill. You made it. I didn’t. Get off the guilt train, because I know if there was any chance you could have saved me, you would have.

I need one thing from you: get out of the army and get to Telluride.

My little sister Ella’s raising the twins alone. She’s too independent and won’t accept help easily, but she has lost our grandmother, our parents, and now me. It’s too much for anyone to endure. It’s not fair.

And here’s the kicker: there’s something else you don’t know that’s tearing her family apart. She’s going to need help.

So if I’m gone, that means I can’t be there for Ella. I can’t help them through this. But you can. So I’m begging you, as my best friend, go take care of my sister, my family.

Please don’t make her go through it alone.

The Last Letter by Rebecca Yarros is a lethal rollercoaster of emotions that punches you in the heart at every turn… and I wouldn’t have it any other way.

This beautifully written and deeply emotional story about a single mother who has suffered so many losses and the hits just keep coming.  I read this story through tears and it left an indelible imprint on my heart.

Ella is a single mother who has inherited a resort from her grandmother when she passed away.  Her only remaining family is her brother, Ryan, who is currently serving in the military.  He asks Ella to write to a friend in his unit who also doesn’t have anyone close to him.

Through their letters they immediately form a bond, so when tragedy strikes again, Ella hopes to have someone to lean on and help her cope with the loss.

Beckett grew up in the system and the military was his only way out.  He is a dedicated soldier, but he doesn’t share much personal information with his unit.  His letters to Ella show that he has a sensitive side and that he can connect with someone, even if he is closed off to everyone else.

When the same tragedy affects Beckett, he handles his grief in a much different way.  Ella is completely unaware of the promise he made, so when Beckett arrives at the resort, she is completely taken by the stranger who looks great on the surface.

I’m going to be completely honest and let you know that this book took my heart and put it through a meat grinder.  As a mom, it was difficult to read some of the circumstances that Ella has to deal with—but, I am so happy that I made it through to the end.

The journey for these characters is so heartbreaking, but it’s also bittersweet.  Love can heal a lot of wounds, but the steps we see them go through will break your heart.

I highly recommend reading this with wine and tissues nearby, but I wouldn’t want you to miss out on the exceptional story told within its pages.

“Ella.” It was a plea to speak, to not speak. Hell, I didn’t know anymore.

“You don’t see me like that. I totally get it.” She reached for the TV remote.

“How exactly do I see you? Please, enlighten me.” I leaned forward, stealing the remote. She’d opened this box and had better well dish it.

She huffed in annoyance. “You see me as a mom. As Colt and Maisie’s mom. And of course you do, because that’s what I am. A mom with two kids.”

“Well, yeah,” I said. Her motherhood—that selfless devotion she had to her kids—was one of her most attractive attributes.

She rolled her eyes with a little sigh, and the metaphorical light bulb went off in my head.

She shot me a look that confirmed my guess and blushed the same crimson of her couch. “You know, you’re right. It’s late.” She faked a yawn. “Suuuuuuper late.”

“Yeah, okay.” She gave me a goofy look and a thumbs-up. “Please don’t make me feel any more idiotic than I do right now.”

Yeah, enough of this bullshit.

I pounced in one smooth motion, taking her back to the couch, sliding over her as I gathered her wrists in one hand above her head and settled between her open thighs.

“Holy shit, you move fast.” There was no fear or rejection in her eyes, just surprise.

“Not in every arena,” I promised.

Yeah, that soft little sigh she did was going to be my undoing.

I let go of her wrists, letting my fingers trail down her arm until I had one hand weaving my fingers into the hair at the base of her scalp and the other at the curve in her waist.

“Feel this?” Then I slid forward, letting my dick stroke along the seam in her pajama pants hard enough for her to gasp at the contact. I couldn’t remember ever wanting to shred a piece of fabric so much in my life. “I’ve never wanted a woman as much as I want you.”

I moved again, and her eyes slid shut as she let loose the sweetest moan.

My dick throbbed, knowing everything I’d fantasized about for the better part of the last eight months was one decision away.

“Beckett.” Her hands found my biceps, her nails digging in.

“Don’t ever think that I don’t want you, because if things were different, I would have already been inside you. I would know exactly how you feel, and what you sound like, look like, when you come. I’ve thought about it at least a hundred different ways, and believe me, I’ve got a great imagination.”

She rocked her hips against me, and I locked my jaw to keep from giving her exactly what her body was asking for. “Ella, you have to stop.”

“Why?” she asked, her lips dangerously close to mine. “What do you mean if things were different?” Her eyes flew wide. “Is this because I have kids?”

“What? No. Of course not. It’s because you’re Ryan’s little sister.” Before I could do any more damage, I got the hell off her and sat back on my side of the couch.

“Because…I’m Ryan’s little sister,” she repeated, scooting so she sat upright, facing me. “And you think he’d, what? Haunt you?”

Three things: The letter. The cancer. The lie.

I repeated those in my head until I was certain I could look at her and not drag her back under me.

“When I was growing up, if I wanted something, I took it. Immediately. I had sex at fourteen with a girl in my foster home of the moment. I opened Christmas presents early if I was lucky enough to get one, and it was usually from my social worker or some charity.”

“I don’t understand.” She wrapped her arms around her knees again.

“I took it immediately because I knew if I didn’t, chances were I wouldn’t get it. It was a now-or-never kind of thing—there weren’t second chances.”

“And why does that matter if I want you to?”

“Because I won’t get a second chance. And I’m crap with people, with relationships. I’ve never had one that lasted more than a month. Never loved a woman I’ve slept with. And chances are I’d do something to screw this up, because it’s not just my dick that wants you, Ella.”

That O popped right back onto her face, and I closed my eyes to keep from lunging across the distance and kissing her. Knowing she’d let me—that she wanted it—sent my need from a bullet to a nuclear missile.

“And when I’d screw it up, because it would happen, trust me, it would hurt Colt and Maisie, too. You’d be on your own again, because there’s no chance you’d let me hang around and help you out like Ryan asked.”

“There it is. You’re Ryan’s little sister.”

“There were only five years between us. Not so little, you know.” She reached for the remote.

“So if Ryan were still alive…” She shot one last look at me.

I let everything slip for a millisecond, letting her see it all in my eyes, how badly I wanted her, and not just for her body. “Everything would be different.”

“Everything but the way I feel about you, which he probably would have killed me for. Where does that leave us?”

“You mean besides me being a dried-up spinster and you being honor-bound to a ghost?”

She rolled her head along the back of the couch, muttering something that sounded like a curse word under her breath. Then she sat up straight and powered on the TV with a click of her thumb. “That leaves us choosing a movie on demand. Because I’m not letting you walk out that door right now.”

“Nope. You walk out now, you might get all weird about this and not come back. Honor is a fabulous thing, but sometimes pride can be a lot stronger, especially when you convince yourself it’s for the good of the other person.”

Damn, the woman knew me.

“I wasn’t the one who crossed the center line,” she teased with a smile that got me hard all over again.

Movie chosen, we sat and watched, both of us stealing sideways glances. There was that saying…the horse out of the barn. Yeah, the horse was out of the barn, and it wasn’t going back in. Not no way. Not no how.

That horse was running amok and screwing with my carefully constructed control.

Rebecca Yarros is a hopeless romantic and a lover of all things coffee, chocolate, and Paleo. She is the author of the Flight & Glory series, including Full Measures, the award-winning Eyes Turned Skyward, Beyond What is Given, and Hallowed Ground. She loves military heroes, and has been blissfully married to hers for sixteen years.
When she's not writing, she's tying hockey skates for her four sons, sneaking in some guitar time, or watching brat-pack movies with her two daughters. She lives in Colorado with the hottest Apache pilot ever, their rambunctious gaggle of kids, an English bulldog who is more stubborn than sweet, and a bunny named General Fluffy Pants who torments the aforementioned bulldog. Having adopted their youngest daughter from the foster system, and Rebecca is passionate about helping others do the same.