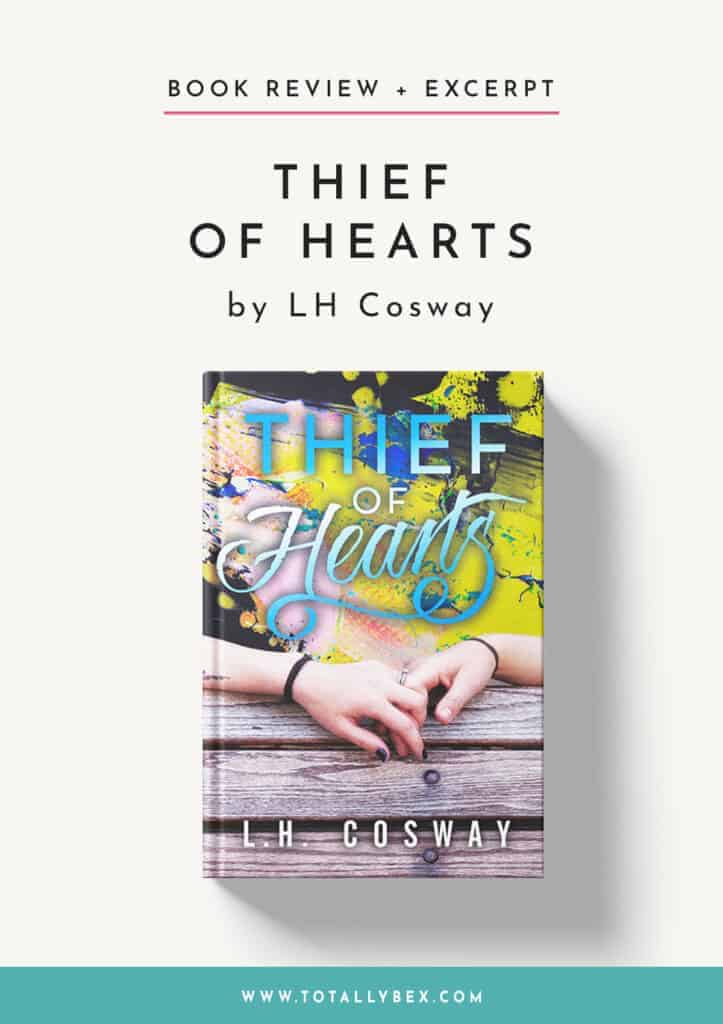 Thank you for the advanced copy of THIEF OF HEARTS by LH Cosway. All opinions are my own. 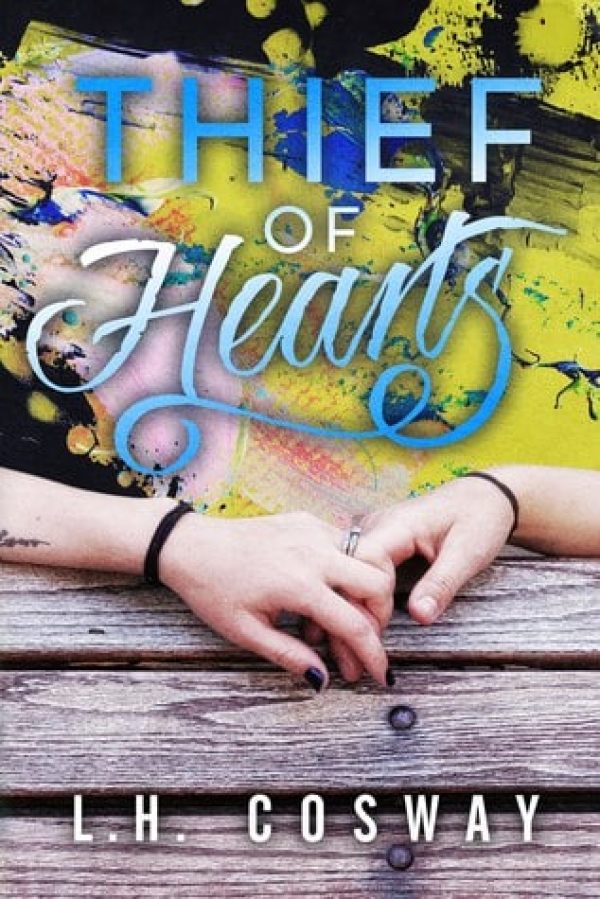 Seduce the teacher.
Meet the cousin.
Make a deal.
Steal the painting.

Andrea Anderson has no clue of the thoughts churning around in the dark and dangerous ex-con’s head as he enters her classroom. In fact, she’s momentarily lost for words. Not in her entire teaching career has she had a student who looked quite like Stu Cross.

A widow at just twenty-eight, love is something Andie hasn’t considered a part of her life for a very long time. However, when lingering touches turn to whispered words and hot, searching stares, she begins to wonder if maybe she should take a leap of faith.

But Stu is in her class for a reason, and it has nothing to do with love. He’s there to burrow his way into her life and repay a debt, otherwise his family will suffer. Andie is the first person to show him true kindness since he left prison, and though he doesn’t want to mislead her, he doesn’t have another choice.

Before long, Stu can’t tell whether or not he’s acting anymore, and his feelings for Andie could throw all of his carefully crafted plans into complete and utter disarray.

I love LH Cosway’s books!  They are like a fuzzy blanket and hot cocoa on a cold day—her words and characters cocoon you and make you feel all cozy and warm inside.  I have enjoyed this series since the beginning and each book makes me love her writing and characters even more.

Andrea is a young widow and adult-education teacher.  Her goal in life is to be a good person and to help others reach their full potential.  She’s a bit mousy, lives with her cousin, and isn’t really living life after the death of her husband and the mountain of debt it left behind.

Stu is a former car thief who has just been released from prison.  He shows up to Andrea’s class and nothing is the same for either of them after that.  Unfortunately, Stu has ulterior motives for getting to know Andie, of which she is unaware.  Stu has some tough choices to make and getting involved with his teacher is the least of his worries.

I knew of Stu from previous Hearts books and he always came across as a Neanderthal meathead who didn’t have much of a brain.  I’m happy to report that Stu is nothing of the sort!  He’s actually a wicked-smart, dirty-talking genius. Who knew?

I loved seeing Andie come out of her shell and start feeling again.  She was so caught up in helping others that she couldn’t see that she needed to help herself.  Her cousin, Alfie, and the other secondary characters helped make the story complete.  I loved Alfie, though.  He’s such a character!  I am curious to see if will have another story written about him.  Whether that happens or not, I am certainly ready for the next story about the Cross brothers.

When the other students were gone and only Stu and I remained, a quiet descended. My stupid dry mouth got the best of me and I couldn’t seem to find any words. Stu just stood there staring, waiting for whatever it was I wanted to say to him. His eyes traced my form and I grew stiff, especially when his eyes landed on my ring finger. His attention lingered there for a long moment in something akin to confusion, but I didn’t really understand why. Finally, I broke the quiet.

“You were twenty minutes late this morning.”

Stu raked a hand over the light stubble on his jaw. “That a problem?”

I cleared my throat. “Yes. Please make sure that it doesn’t happen again.”

His gaze went to my wedding ring again, before moving up to my lips and then my eyes. I rubbed my palms on my trousers. Stu took a step closer, and the fact that he was standing over me while I was still seated made me feel at a disadvantage.

“You need to do the work I give you, otherwise there’s no point in you being here.”

He let out sigh now, like he finally understood my irritation. “You’re pissed that I didn’t read the book.”

“I’m not pissed, and please don’t use that language with me. I’ve already had to warn you yesterday. My job is to teach you, Stu. It’s my passion, and if I can’t help a student fulfil all their potential then there’s no sense in either one of us wasting our time. And look, I understand all this must be a big change for you. If you’re feeling overwhelmed, just let me know and we’ll take it slow. But if you don’t want to learn then I’m not going to force you.”

Stu stared at me for a long moment before a small smile graced his lips.

“You know, this is the first time a woman has ever offered to take things slow with me.” He tilted his head, his smile turning flirtatious, and I really didn’t get why he was trying to avoid being serious. I wasn’t there to berate him and I only had his best interests and the best interests of the class at heart. Like I said before, one bad egg could spoil the lot.

“You don’t have to deflect. There’s no judgement here.”

Now he bent to lean his hands on my desk and look me directly in the eye. “I’m not deflecting, Miss Anderson, I’m flirting.”

His voice was low and purposefully husky. I fought the urge to roll my eyes. It just felt like such a stereotype for the young worldly male student to use his wiles to flatter the plain, bookish teacher. Little did Stu know, I was impervious to wiles, nor did I have any real interest in the opposite sex. I hadn’t been interested in anyone at all since Mark, and I couldn’t imagine that changing. He had been my world. Irreplaceable.

But you did feel attracted to Stu when he first arrived, a little voice in my head piped up.

And yes, okay, that was technically true, but I put it down to being female, and Stu Cross was the sort of man all women reacted to, whether they were teenage girls or eighty-year-old grandmothers. He had sex appeal; it was as simple as that. Luckily, I was more or less unsusceptible to sex appeal. Sure, he gave me vague stirrings, but I wasn’t the sort of woman who dropped her knickers for vagueness.

I let out a soft chuckle. “Here’s a life lesson for you, Stu. And I say this with absolutely no malice or hard feelings. The combination of young and female in a teacher does not equal naïve. Pretend flirting with me isn’t going to help you pass. What will help you pass is working with me, participating in class, and arriving on time in the mornings. I’ll always be respectful toward you, and I hope you can learn to be respectful to me in return.”

I expected him to react one of three ways: embarrassed, apologetic or hostile. Surprisingly, it was none of those. What he did do was lean closer, granting me a waft of his masculine, woodsy cologne. His gaze never left mine as he replied simply, “And here’s a life lesson for you, Miss Anderson. I’m not pretending.”