Thank you for the advanced copy of THE PLAYER AND THE PIXIE by Penny Reid and LH Cosway.  All opinions are my own. 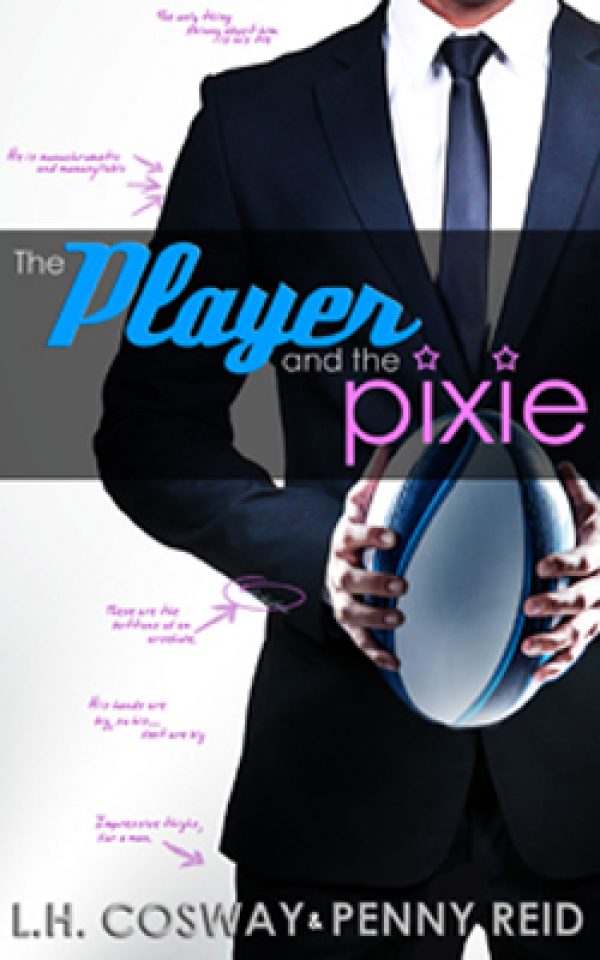 THE PIXIE
Lucy Fitzpatrick doesn’t like rugby.
As the little sister of Ireland’s most infamous rugby player, Lucy can’t seem to escape the championship-sized shadow cast by her big brother, or her mother’s frequent attempts to micromanage her future. Her rainbow hair is as free-spirited as her quest for inner peace, yet overbearing expectations keep bringing her down. And when she’s down, her compulsive little problem lands her in seriously big trouble.

THE PLAYER
Sean Cassidy is a cold-hearted brute… or so he’s been told. Frequently. By everyone.
His blonde locks, baby blues, and rock hard bod make ladies the world over drool with desire. As the rugby world’s second most infamous player, he should be basking in his success. But Sean has never been content settling for second place, and his frequent confrontations with Lucy’s big brother leave him cold. And when he’s cold, his compulsive little problem lands him in the lap of Lucy Fitzpatrick.

THE PLAN
Sean has a problem only Lucy can solve. Lucy has a problem only Sean can fix. The solution seems obvious: you scratch my back, and I’ll bail you out of jail. But when their business arrangement unexpectedly leaves Sean scorching hot and Lucy on the precipice of inner peace, can they convince the world—and Lucy’s big brother in particular—that this is the real deal?

Either way, both the Player and the Pixie are about to teach each other some pretty monumental lessons about family, life, but most importantly, love.

The Player and the Pixie

Penny Reid and LH Cosway each write spectacular books in their own right.  But I think the real magic happens when they write a story together.  Like rainbows and unicorns type of magic, the kind that’s sheer perfection.

These ladies write extraordinary characters who are real, troubled, and flawed, but you can’t help but fall in love with them anyway.  It was like that for me with Annie and Ronan in the first book, so I honestly wasn’t sure if I could even like the secondary characters, Lucy and Sean, in their own story.

Sean was such a prick in The Hooker and the Hermit and Lucy seemed like she could be a wishy-washy pushover.  Well, my worries were for naught and I couldn’t have been more wrong because I ended up loving both of these characters…maybe even more than Annie and Ronan.

So, Sean is still a bit of a prick in The Player and the Pixie, but once we get more of his personal story, it starts to make a lot of sense.  I found myself feeling sorry for him more than once.  Lucy is still a little bit of a pushover, but it is only where her horrible mother is concerned.  When she is far way from her mum, Lucy has things under control (well, for the most part).

Once I started reading their story, I didn’t want to put it down.  My emotions ran the gamut, from laughter to embarrassment to sadness to joy.  I never wanted it to end, but at the same time, I had a lingering feeling of wistfulness and melancholy that hovered over me until I read the last word.

I wasn’t expecting such diverse and confusing emotions, and I think that is what drew me in and made this story so wonderful for me.  (So, thanks for the emotional tornado, ladies!)

I’m so happy we were given a tiny clip of the third book to read because I can’t wait to get my hands on more from this magical dynamic duo of writing.  If The Cad and the Co-ed is anything like the first two books, it’s guaranteed to be a winner!

Later that evening, I got ready for the party. My dress was cream lace, sort of floaty, and I wore my hair down with a single daisy clip at the side. I was sitting in a VIP room at the back of the venue with my brother, his fiancée Annie, and a couple of Ronan’s teammates. We were enjoying a few bottles of champagne and discussing the success the Irish squad had enjoyed during the year. Mam was elsewhere, socializing with the other team mothers, and I was glad. I just wanted to enjoy my night without her saying something about how unattractive or embarrassing I was.

We were all having a great time until the door swung open and Mr. Tall, Blond and Up Himself walked in. That would be Sean Cassidy to those not in the know, Sleazy Sean, as nicknamed by the rugby club. I tried to always see the good in people, but he and my brother didn’t have the best relationship. Not only had Sean slept with Brona, Ronan’s ex-girlfriend, but he was also universally acknowledged to be an arsehole.

It went against everything I believed in to say, because I liked to think everyone was redeemable in some way, but Sean just wasn’t a nice person. He actually seemed to be proud about the fact, like he wanted people to dislike him.

The conversation died down, everybody casting surreptitious glances at Sean who swaggered his way up to the private bar and loudly ordered a bottle of bubbly. That’s actually what he called it, but speaking of bubbly . . .

Almost of their own accord, my eyes wandered over his broad shoulders, muscular back, and down to what must have been the most perfect bubble butt I’d ever seen. You know how sometimes male athletes develop those really defined, rounded but masculine derrieres? Well, Sean Cassidy was most definitely rocking one of those, and I couldn’t resist the urge to ogle it. It was pure muscle and simply bite-worthy.

I snickered to myself when I realized I’d almost commented on it out loud. Okay, I’d officially had too many glasses of “bubbly” as Sean so douchebaggedly called it. He must have heard my snicker because his attention landed on me. He stared at me for a second, arched a condescending brow, then dismissed me all in an instant, returning his attention to the bar.

After about thirty seconds everyone went back to their conversations, trying their best to ignore Sean. Ronan had told me once that Sean was the kind of person who thrived on attention, so ignoring his presence was probably the best course of action to take.
It was my own fault I couldn’t stop staring. We’d never spoken before. In fact, I’d only ever seen him from afar at parties like this one, or on television when there was a match on. But right now he was close, close enough for me to realize just how devastatingly and legitimately handsome he was: light blue eyes, a strong jaw, nice lips, attractive nose.

Why were the beautiful ones always such pricks, huh?
He leaned back against the bar, having uncorked the champagne bottle and poured some into a glass. He wore a sh!t-eating grin as he stared right at Ronan, holding the glass to his lips, his pinky popped. I knew he was getting to Ronan when my brother muttered to Annie under his breath, “Is he f*cking sh!tting me?”