Thank you for the advanced copy of WANDERLUST by Lauren Blakely. All opinions are my own. 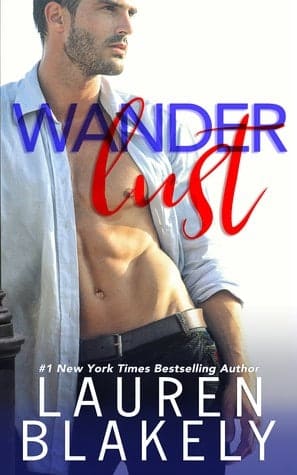 A charming British hero, the woman who tempts him, and a hands-off arrangement that’s oh-so-hard to maintain.

My bags are packed and I’m ready to go. All I have to do is board a plane, and I’ll be on my way to fulfilling a promise I made long ago. Bonus points — my last week in Paris looks to be even better when I meet a gorgeous, clever American woman and make plans to take her back to my flat that night.

But before we can get together for what would surely be a fantastic final fling, my boss hits me with a double whammy. My previous client didn’t pay, so there’s no trip, and the new client I now desperately need is none other than the tempting American I’m about to take home.

Have I mentioned this timing bloody sucks?

I’ll admit it — I have a big weakness for a hot British accent. As in, they make me swoon, sigh, and want to toss my panties. Good thing I can avoid that kind of temptation in Paris. So it’s just my luck that the man who’s the key to success in my new job is the man whose voice makes me melt. Oh, and we have to spend all our days together for work.

Thanks a lot, fate.

To top it off, I quickly learn he’s witty, kind and has a heart and mind I’m falling for fast.

All I have to do is resist him every single freaking day. That’s so easy. Not.

But then I learn that’s nothing compared to the real hurdle we face.

What could go wrong with falling in love in Paris? Nearly everything, it seems…

Note: I listened to the Audible version and read a Kindle copy of Wanderlust, so my review will include my commentary on both.

When your love of Lauren Blakely, British accents, and Paris all converge in one book, you know it’s going to be epic!  In fact, I found that it was a brilliant combination of jaunty, saucy, sweet, and swoony with just a touch of seriousness and sadness.  With Lauren’s signature humor, banter, and wit, along with the depth and development, Wanderlust is an absolute gem to both listen to as well as read.

Joy is a bubbly Texas native looking to start anew in the City of Light, while Griffin is a British expat looking to leave Paris and live his life to the fullest.  They meet by chance and have flirtatious conversations dripping with electric chemistry — but then life throws a wrench into their budding relationship: they are actually pseudo-work colleagues and Griffin is only in town until the end of his current contract as a translator.  Cue the sad violins.

Of course, as they spend more and more time together, they inevitably grow closer. From flirty strangers to friends and then to more, the pacing of the relationship is actually quite perfect.  I loved how they get to know one another, share the saddest parts of their pasts with one another, and build a true friendship before the inevitable happens.  They help one another let go of their hurt and disappointment, and that was the most satisfying aspect of the story for me.

As for the audiobook, the narration is amazingly stellar perfection!  The actors are absolutely perfect for the storyline and for the characters.  As many people know, the choice of narrator can make or break an audiobook, but the smooth British accent of Richard Armitage and the effervescent Grace Grant bring both the characters and Paris to life.  Like Joy, I’m a sucker for a British accent, but when he also speaks fluent French? Ooh, la la.  (Yeah.  That was good.  Really good.)

I don’t care whether you choose to listen to this book or read it on your device (or both like me), just do yourself a favor and read it.  The romance is top-notch, the characters are fun and swoony together, and the witty banter is worth its weight in gold.  I can’t recommend it highly enough!

I’ve tried to analyze precisely why the sound of a man’s words can elicit this reaction in, frankly, millions of women. But when I break down an accent and study it like a chemical reaction, it’s nearly impossible to draw a logical conclusion. The ingredients in and of themselves don’t seem swoontastic enough.

And yet, accents have been known to induce major swooning.

That’s why, in my professional opinion, the sounds aren’t the rocket fuel for the tingles. Instead, it’s the associations evoked. Italian is food, wine, and days drenched in the pleasures of the senses. Australian is the laid-back twang of a surfer. A Southern drawl says a man will take his sweet time. Oh, yes, darlin’, will he ever.

But British? Dear God. A delicious British accent to my oh-so-American ears triggers wave after wave of goose bumps across my skin. My knees wobble. My stomach swoops. My skin heats. All the turned-on centers in my body are cranked to high.

A British accent is James Bond in a bottle. It’s sex, it’s style, it’s sophistication, and it’s the man who’ll find his way out of any jam, save the damsel, and do it all with silver cuff links on.

That’s why I say it’s a damn good thing I’m moving to a country that won’t be chock full of my personal vocal kryptonite, since I don’t have the time or inclination for distractions in my life right now. Look, I don’t have a single problem with the French accent whatsoever. A hot French man can voulez-vouscoucher avec moi, if you know what I mean.

But it’s a British accent that turns me to Silly Putty, so in Paris I’ll be mighty fine.

Then, I meet him.

A #1 New York Times Bestselling author, Lauren Blakely is known for her contemporary romance style that's hot, sweet and sexy. She lives in California with her family and has plotted entire novels while walking her dogs. With fourteen New York Times bestsellers, her titles have appeared on the New York Times, USA Today, and Wall Street Journal Bestseller Lists more than seventy-five times, and she's sold more than 1.5 million books.