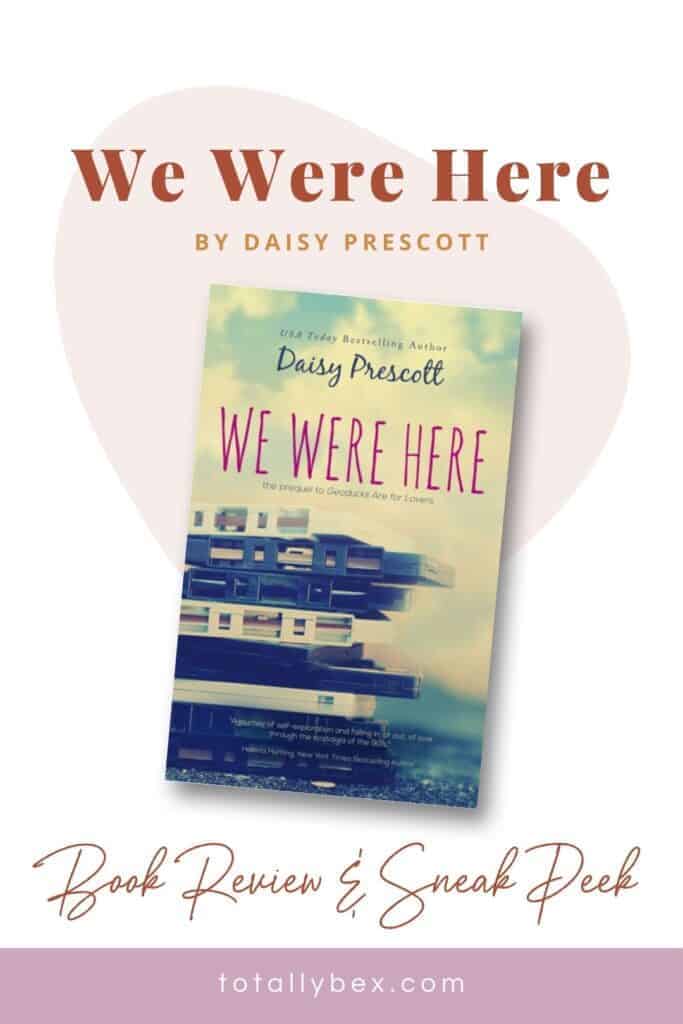 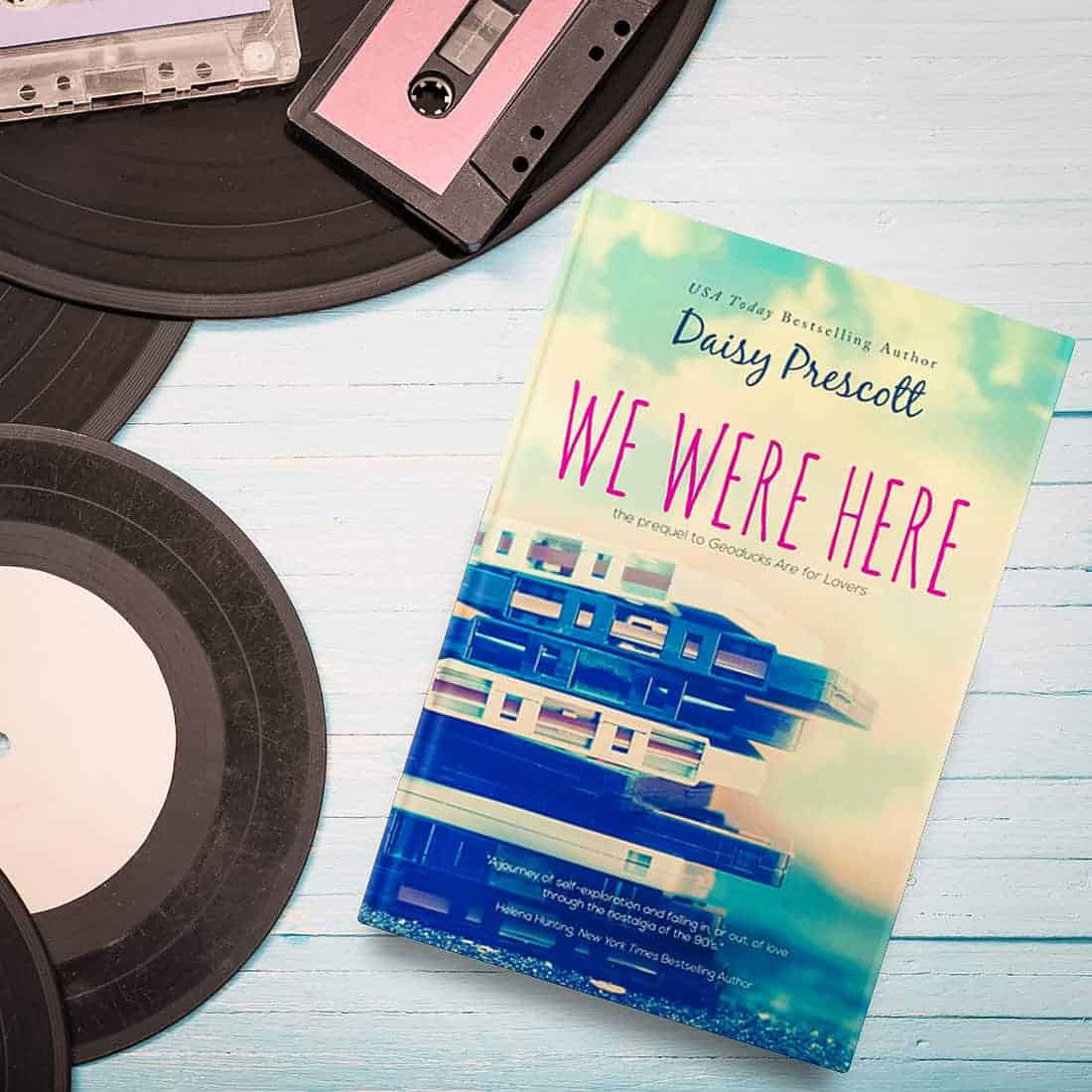 In the 90’s, sex was dangerous, music was life, and love was something no one had ever felt like we did.

This is the story of seven friends. We met in college, completely free for the first time in our lives, and determined to enjoy every minute of it. For four years, we gossiped and flirted, partied, and road-tripped. We were inseparable.

Each of us has our own story of falling in or out of love. Of finding out who we are. Of growing up.

We thought we knew everything. We knew nothing.

We Were Here is where the Modern Love Stories begins, in a standalone that perfectly captures the humor, angst, and sheer chaos of college.

Thank you for the advanced copy of WE WERE HERE by Daisy Prescott.  All opinions are my own.

We Were Here is my first book by Daisy Prescott, and I picked a great one to start with. I loved it so much!

The writing is crisp, the dialogue is witty and snappy, and I was drawn into the story from the very first page.

We Were Here Backstory

Set in the 1990s, We Were Here follows the lives of several students who become friends. It’s almost like having seven novellas in one book, with each one telling the story of a character and flowing from one year to the next.

I loved each and every character and was left wanting more of their stories as each section ended.

I love how each chapter has a 90’s song title and the story contained in that chapter reflects the title or sentiment of that song. It is genius, really. Like art imitating life, I was in college during these same years, so for me, it was like hearing the soundtrack to my memories of that time.

Even if you weren’t alive during the time this book takes place, though, the story is universal and I think everyone will be able to relate to the characters.

Geoducks Are for Lovers Prequel

I thoroughly enjoyed We Were Here and I can’t wait to read Geoducks Are for Lovers along with the rest of the books in the Modern Love Story series.

Do yourself a favor and read this book. I think you will be hooked!

After being quizzed about the Dewey Decimal system, and failing, I returned to my room in shame. At this rate, if I wanted to work on campus, I’d be washing dishes in the dining hall. Nothing could be grosser than the used food and unclean dishes of thousands of college students. I gagged at the thought as I opened our door.

Inside, Jennifer—my perfectly nice and perfectly normal roommate—was straddling a guy on my desk chair, making out.

She might have been trying to eat his face. I couldn’t really tell in the two seconds I stared at them before clamping my eyes shut. I know I spied her tongue. Outside of her mouth. All I could see of him were his dark hair, long legs, and brown Wallabee boots.

Panicked about interrupting something, and simultaneously feeling like a prude, I backed my way through the open door. After it quietly clicked close, I pressed my head against the cool metal.

I could go back to the library, except I left there ten minutes ago. The dorm lounge was an option, but this time of day meant it would be filled with some random club. I couldn’t remember if Thursday’s meeting was German Lovers or Save the Geoducks—our school mascot. Neither appealed to me.

I stared harder at the painted metal, wishing the make-out session on the other side would end sooner rather than later.

“Are you locked out?” The blond guy from down the hall rested his head on the bulletin board next to my room. “Or are you praying?”

Pressing my cheek on the door, I twisted to see him more clearly.

A loud moan sounded from inside the room. “Oh, oh, oh God.”

“Sounds like someone in there is praying.” His lips curled into a smile. “You might want to step away, lest someone think you’re a pervert for eavesdropping.”

I jumped away from the door. “I wasn’t listening!”

Chuckling, he held up his hands in defense. “Not judging you. Praying and voyeurism both have their places, usually in Madonna videos.”

Another not so soft groan carried from my room. I took a step farther away. My favorite black on black Swatch showed the time as four o’clock. Too early to go to dinner. Looks like I’ll be going to the lounge after all.

“You want to come hang out in my room until they finish whatever they’re doing in there?” His offer sounded genuine and his smile was more than friendly. He gestured over his shoulder to the open door across the hall and down a few rooms. “I can promise you, my roommate isn’t in there making out with anyone. We should be safe.”

Her Modern Love Stories feature characters in their thirties and forties finding and rediscovering love in unexpected and humorous ways. Her Wingmen books star regular guys who often have beards, drive trucks, and love deeply once they fall.

Born and raised in San Diego, Daisy currently lives in a real life Stars Hollow in the Boston suburbs with her husband and an imaginary house goat. When not writing about herself in the third person, Daisy can be found traveling, gardening, baking, or lost in a good book.

To learn more about Daisy and her writing, sign up for her mailing list here (copy and paste this link): eepurl.com/xhXb5. Send her an email at: [email protected]